We Get The Key To The City 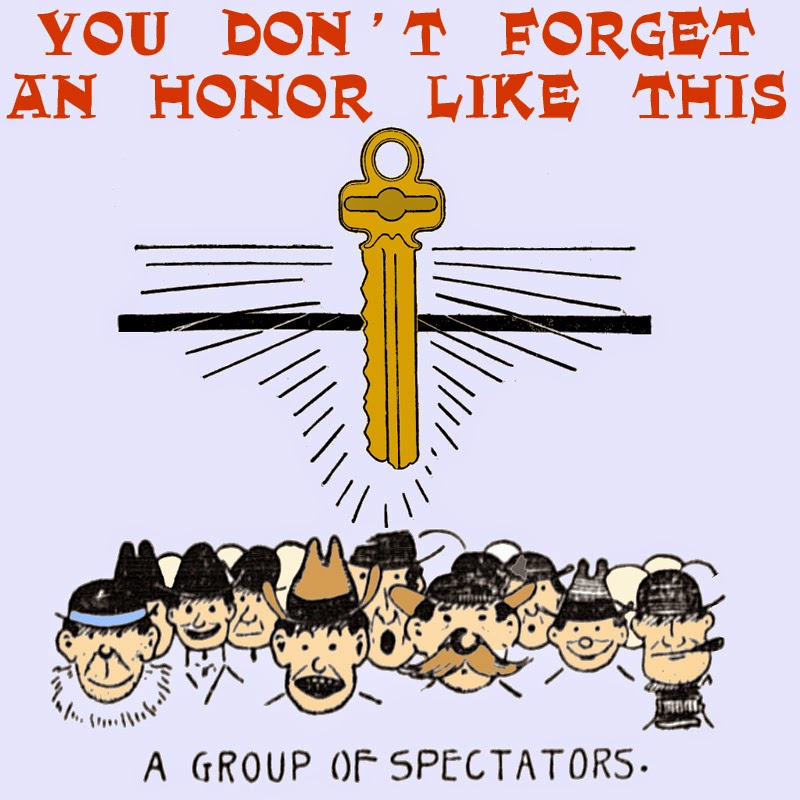 Billionairemania has overtaken the city, as the billionaire and I have spread our wealth far and wide. When they see us downtown or at the shopping center, kids are opening the doors for us and getting twenty bucks. Such good kids.

I've never been so popular or conspicuous, in a positive way, in my life. For which, all I can say is, Thank God for money. It's true what they say, the world kneels at the feet of a rich man. There's always someone nearby with his hand out and a look of sincerity, a beautiful thing.

This thing has taken on a life of its own, like a volcano. I imagine volcanoes gather their magma below in pools, and that it becomes super-heated, then somewhat confined, until it has to blow upward. That's what billionairemania's like. A little town with two billionaires in it brings out the fever and fervor, and it's packed tight, until, "Kerblooey!"

It has reached the highest levels, too. The city council a few days ago, in emergency session, came through with a long-rumored resolution that there simply must be a celebration, an event of some sort, to commemorate the billionaire's arrival, and by extension my favorite-sonship in the town. The billionaire's billions are his glory and my billions reflect his glory, being a gift. But some are warmer to me, because they imagine the billionaire eventually leaving but me remaining. And as long as I keep spreading the cash, I'll have a special place in their hearts. What a beautiful feeling.

So the ceremony was at noon today on the courthouse lawn. The townspeople were gathered, the various fathers of the city, and the one councilwoman we have, and the mayor. The mayor gave a few remarks about shared prosperity, then called us forth "as a couple" to receive the golden key to the city.

Each of us made our remarks of thanks. For my part, I noted, "This has been my home all my life. I have never known another home. In my opinion, and I know I'm prejudiced, this has to be the greatest town on earth. Friends, I receive this key in the same wonderful spirit in which it is given. It is the greatest honor I've ever received in my life. And I have a special place to mount it. Presently I have several pictures, wall-hangings, above my couch. But when I get home, those will all come down, and this key will take their place. At the present time, I am a very wealthy man, and it feels special to have this key. Who knows, though? Someday I may be poor, and if that happens I will still see this key as special, and think back to this day and you with fondness. You are my friends and neighbors, my people, and I love you very much."

Remarks like that are the best, completely sincere. Truthfully, I was almost overcome with emotion, by the power and sincerity of my own words. After the ceremony they crushed in on me and the billionaire. As a goodwill gesture, and as another way of giving thanks for the honor, the billionaire and I handed out fifty dollar bills till they ran out, about a half hour later.

Just as a follow-up, if I was uncomfortable with any of it, it was on one small point, the mayor calling the billionaire and me "a couple." I guess we are, but not in that sense. There's other things going on in my spirit, a sense of longing.

OK, enough of that. I have a book sale to go to -- the biggest book sale in the state. It opens tonight!
Posted by dbkundalini at 12:50 PM