Being Filthy Rich Is A Pleasure 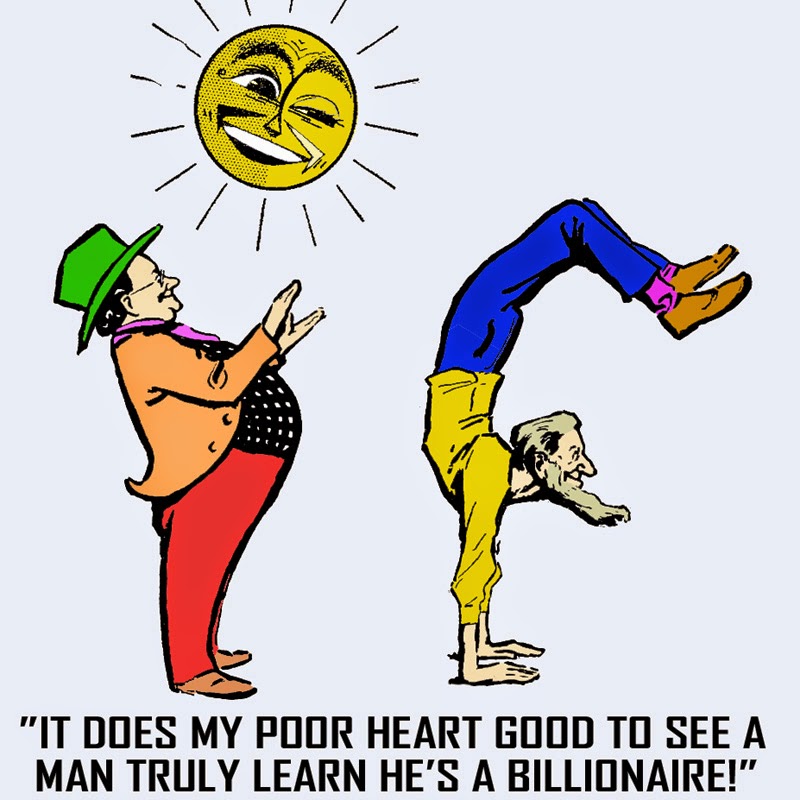 I'll admit it, I freaked out yesterday, foolishly taking on myself the whole burden of disposing of the books from the book sale. I'm just used to my old life, where either I do it or it doesn't get done. But the problems I normally handle are small and a lot easier.

The billionaire came over and saw me sitting there, gnawing my fingernails to the quick, with a miserable look on my face, and asked what was going on. I explained my many predicaments, expecting some sympathy. But all he did was laugh his head off, having forgotten, he said, that I was such a newbie. At first it hurt to hear that, then I realized, I desperately need a second opinion.

He cleared it up in a second, "You don't need to worry about any of that! That's why we hire people, to do the actual work. Being filthy rich is supposed to be a pleasure. You don't see me weighed down like you are. We'll get some people in there for you right now. They'll hire other people, then step back and it'll manage itself." Just like that? Could it really be so simple? "Of course," he said, "that's what money's for."

And true to his word, he made one phone call and within the hour I had an actual company, staff, employees, and probably a loading dock somewhere, and I don't have a worry in the world. Basically it's a plug-in system. If I wanted to go and see what's going on, I could, but there's no particular reason why I should. Just let it go till everyone develops a routine. They'll not only take care of my current problems, they'll invest, diversify, and in no time, probably by this time tomorrow, I will have bought out an industry and be making a profit. I can't wait to see semis go by with my name on the side!

I should back up a bit. Remember the worm bedding plant in Alabama, with their strict rules, hesitating to receive my 300,000 books? The billionaire made a couple phone calls and I already own the company! Then there was all the business about interstate commerce, regulations on loads over 50 tons, etc.; the guys working for me have already worked it out, including procuring the train cars for transport and all the logistics. It's really easy when someone else does it!

They've also put together a panel of university professors -- just moonlighting -- to go through the books before they're gone, to pick out what they know I'll like. Someone scanned my existing library, authors and titles, and the professors, with computers and their own expertise, will make fast work of holding back what I would have wanted. Amazing.

That I want to see. If it's anything like I imagine, it'll be a smooth operation. But it's true: Why should I waste my time on it? Although, maybe I could get a few pointers, like if I want to thin out my library at home. I'm not hiring guys for everything ... there's still some things I want to do for myself. In addition to eating, sleeping, and brushing my teeth.

OK, lesson learned: "Being filthy rich is supposed to be a pleasure." I will live large. I'm going out for ice cream right now, and that's final.
Posted by dbkundalini at 2:12 PM