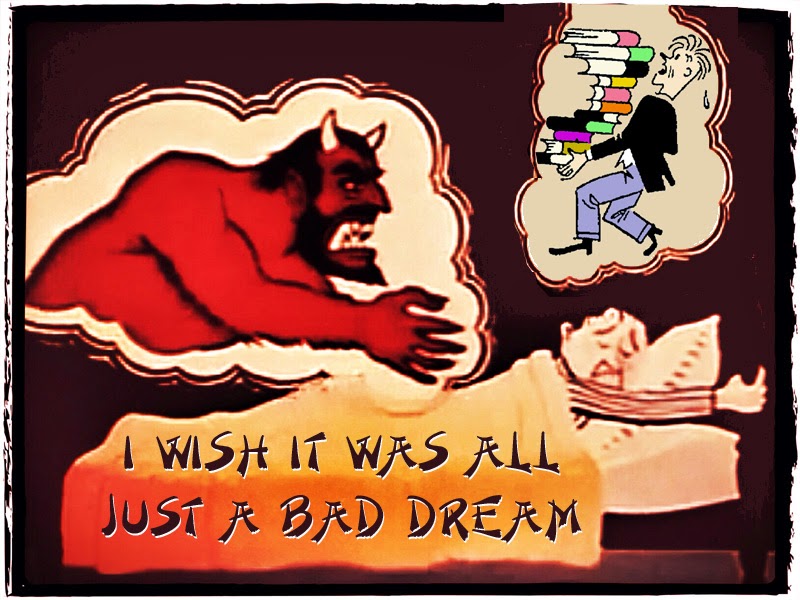 A few of you have already written in, complaining and pointing out the problems with my book sale scheme. And I have to say, I think you're right. What a fool I was! What possessed me?

The weird thing is, In all my thoughts and plans leading up to the book sale, I never once thought of the downside. Of course I knew it'd have some effect on others going to the book sale. And in a way, perhaps this was the real purpose, to screw them over. And let my money do my dirty work. Ouch. These are painful things for someone as normally saintly as myself to admit.

Beyond the psychological troubles I may have displayed in this whole episode -- and I'd first assign some of the blame to my recent $2.1 billion windfall -- there is the more practical consideration of whether undercutting everyone and buying 300,000 books, obviously a mixed lot, to get 1,000 books that I might actually want was a good plan. Now, looking back on it, I have to say the answer is clearly NO.

Frankly, friends, this isn't the first time something like this has happened. I went to a book sale one other time and announced I was buying them all. They told me I had a half hour to get them all out. Being a single person with a small car -- and no $2.1 billion with which to hire helpers -- I had to back out. Even then, I was thinking, Is this any way to build a personal library?

So here I am again, I promise for the last time!

Reader G.A. wrote in, "How much easier and satisfying, beyond the euphoria of screwing over hundreds of people, it would have been, just to spend your $10 million on quality books at quality book stores, or online dealers. The very dealers you called 'book hawks." Instead of excoriating them, you could have used their services instead of your logistics team, and come up with many thousands of quality books that interest you for a lot less than $10 million."

To whom I say, "Yes, you're right, G.A. Mea culpa. What an idiot I was. It was truly a $10 million boo boo. It had more to do with the euphoria of doing it than the actual books. And, as the old question goes, What price euphoria?" I see that now. It's funny that the logistics team didn't see this angle either.

So, point well taken. I feel sort of like God after he flooded the world. "What did I do? Maybe I am just the blind old demiurge the Gnostics talk about. I'm an idiot, guilty as sin. I shall never again flood the earth. If only one of the angels, the angel of logistics, let's say, had raised the slightest objection to my plan! What did I actually accomplish? I killed an entire planet of people just to commend one guy for his righteousness. And he wasn't really any better than the rest of 'em, getting drunk in the end and exposing his male parts to his family. On the other hand, What price euphoria?"

Can you put a price on euphoria? The weird thing about euphoria is it sometimes has a mind of its own. But apart from the book sale, I feel that I've made fairly good choices in life. For one, I'm 62 and don't have any "transmitted" diseases (trying to keep it clean for the kids). And there's nothing more euphoric than those events, I've heard, leading to such unnamed diseases. Those are experiences I shall never know.

Another reader, who was in line at the book sale, has a firsthand take on being screwed over:

Mary writes, "I'm a regular reader of your blog, but now that I've found out firsthand what kind of person you really are, I'll probably drop off. While you were perfectly within your rights to buy everything at the book sale, I want you to ask yourself, 'Was it the right thing to do?' Take into consideration the fact that some of us depend on getting books at sales like this and selling them for our livelihood. I have a daughter who will probably never know what it is to wear shoes, because I'll never be able to afford them now."

This hurts me for multiple reasons. Let me assure you, Mary, I am a nice person, and last night was an aberration. The thought that your little girl has never worn shoes, and now perhaps never will, including her adult life in the future, because of my actions, cuts me deep. I would like you to send me her shoe size and your address, and I promise I will lavish her with so many shoes you won't know what to do with them all.

As far as the books, if you could tell me what sort of books you sell, I will invite you over and give you a chance to look through them. You would probably object that, yes, I wronged you personally, yet I'm willing to do something about it. But what about all those I wronged who won't write in, and so will see no redress. These are great points, even if I had to put words in your mouth to make them. Write me.

Yes, I see everyone's point. I could've gotten more and better books by selectively buying them from dealers. And I hurt many booksellers by depriving them last night of new stock. Like God promising he would never flood the earth again, I promise I will never ruin another book sale.
Posted by dbkundalini at 12:49 PM