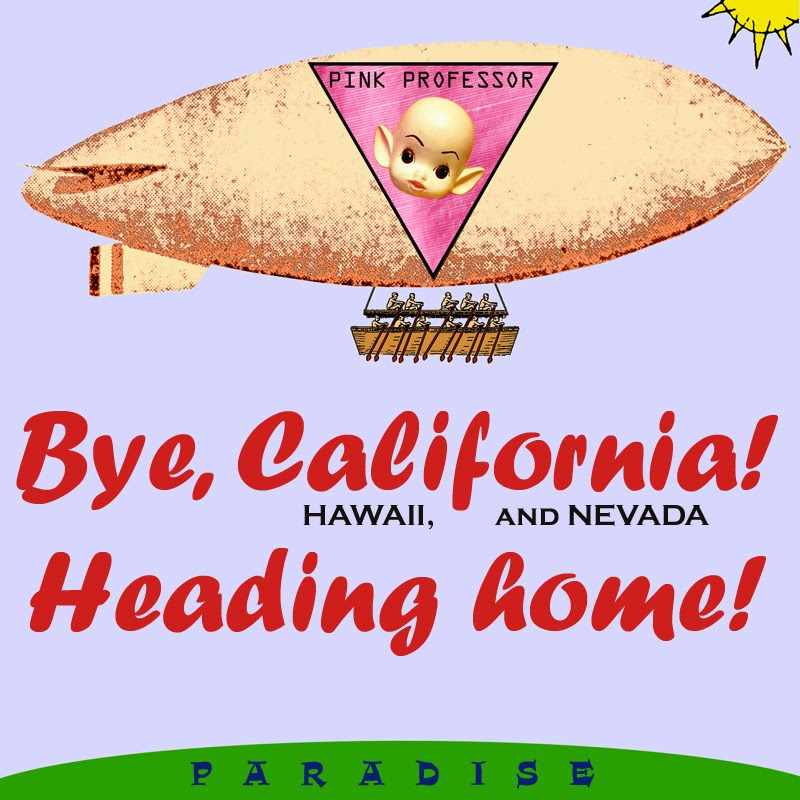 Of course I'm delirious with my good fortune to this point, having received back the missing piece of my soul, 7% of its total, lost in San Francisco in 1975. Then my delirium continued with my ecstatic reunion with The Pink Professor. To think we're back together again! ... My mind is totally blown! Then, as well, I've had the coolest, richest friend at my side, the billionaire! None of this could've happened without him, the financing alone would've staggered me. Cool dude! I'm about ready to explode if anything else cool happens; don't try me!

Everyone's looking at us -- me and Pink -- and wondering what's next? And how does the billionaire fit in this picture? Since, naturally, everyone thought that he and I would end up together; we've been joined at the hip all month, so that would've been a pretty good guess. Yeah, yeah, he's still in the picture -- I'll put all rumors to rest. He's still in the picture as a dear, dear friend. Who did for me so many things that blew my mind. The whole month's been a mind-blower!

I don't know what else I can say, though, without making everyone entirely jealous. Because I know, one guy's good news is a source of pain for everyone else. People would rather see you dead than think they themselves somehow missed out. How can this guy be so happy, while I sit here in my same old boring life, missing out on everything? I'm not going to ask for a show of hands, OK? Just know, I know that's how the world goes 'round. I've felt the daggers shooting my way since way back, like when the billionaire gave me the $2.1 billion. The cattiness I got, I shouldn't say anymore.

Let's face it, though, not everyone's going to live their lives in such a way as to please you. Still, I know, at some point I have to let this story subside into obscurity, because from your point of view, it's nothing but rubbing your face in it, if someone else is too fortunate. I get that, I took Psych 101. It's why you never hear much about the lives of billionaires. You may see in the paper that a billionaire donated money to a political candidate, but that's it. Where they live, what they do there, etc., the papers don't print that. They don't dare, or we'd cancel our subscription. The lives of quiet desperation we typically live, we don't want their good fortune to be an added burden.

With me, then -- in this story -- it was only adding insult to injury that barely anything went wrong. And that's what people want when they get their grubby paws on a story. A falling out, a sad ending, and for me, the hero, to slink away licking his wounds, to the general merriment of all, taking on myself the derision of my peers, one who aspired to heights above his abilities only to crash to earth according to the spirit of divine justice or karma. Since that didn't happen, What a trite story! I'm chuckling a little. A story like this can go that way, and for most of you that would've been satisfying. But what about me? Oh, I know, I committed the unforgivable sin of being so wealthy my success was guaranteed.

With that out of the way, allow me to continue---

We were so happy in San Francisco. The Pink Professor said goodbye to his underlings/students under the bridge. The billionaire spent close to $4 million tricking out The Pink Professor symbol on the blimp, adding my symbol to it, to portray my soul-completeness and the fact that we were wonderfully reunited, something to celebrate.

We headed for home, one of the world's first journeys of this sort where there was a crew of galley slaves and not a single man was lost. I was virtually certain a few of them at least would've gone AWOL in San Francisco, only to be found in a bathhouse. Am I right? I know if I was a galley slave reenactor and got a free ride to Frisco, I'd probably bale. The hell with diddling nothing but oars, am I right?

A little more happiness to lay on you: (If you're the extremely jealous type, don't read any further.) It's not in the picture, but the billionaire spent an additional $30 million, maybe $40 million, to rent 40 additional blimps (without galley slaves, which was cost-prohibitive) to accompany us as far as the Wyoming area. Also, he notified every biker bar between the coast and home to come out and wave at us. They know The Pink Professor; he's the sun, I'm the moon. And they definitely love him! So they're all out along our journey, throwing pretty petals high in the sky, a lovely sight.

I became so ecstatically happy, I had to go to my quarters, lie there and think, think, think about The Pink Professor, and thank my lucky stars, of which I saw quite a few.
Posted by dbkundalini at 6:41 PM