The Bikers Bar Is Now Mine 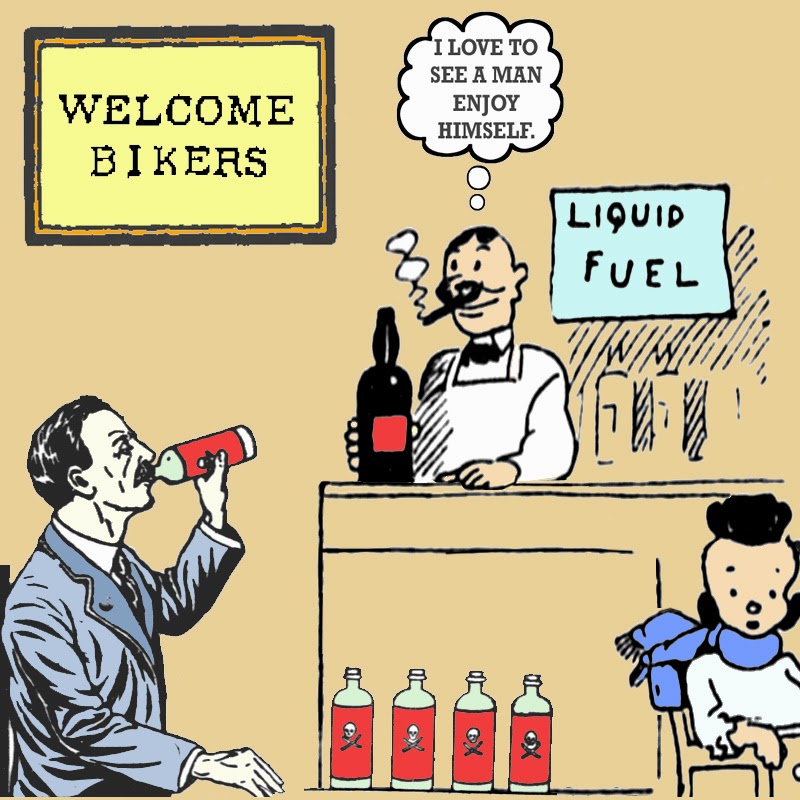 Whatever your troubles,
the Roadhog Roadhouse
always makes things better.

The billionaire is everything a great friend should be, extremely rich, wallet always open, and when you need him, nearby. When I first met him, I said, "A guy could get used to this," and that early intuition has been confirmed time and time again.

That's not to say I don't sometimes want to use my own money. Just to clarify, I personally make about $450 a month in disability income (game toe), then on top of that I have around $2.1 billion, thanks to the billionaire. Some of that I'm saving -- the $450 -- in case the rest goes ... fizz.

Something happened this morning that for a second pissed me off at him, but I can't stay mad very long at such a good, rich friend. Although in a way I'm doing him a favor with my anger, because billionaires don't get that true gut reaction very often. Everyone's always kissing up to him, he probably likes being told off once in a while.

He came over very early, before I'd even been to the bathroom, before the dog had been out, and mousetraps checked, you know the routine. A guy wants his private moments without every billionaire in the world horning in. To make matters worse, he springs this news on me, that he bought the Roadhog Roadhouse bikers bar!

I was all up in his face, and pounded on his chest, crying, "You knew I wanted that bar!" Only I hadn't gotten around to it yet; the world of high finance is new to me; I didn't even know who to contact, Eddie, probably, since he's the owner. So I'm halfway cussing the billionaire out, "You son of a --! You rotten bast-- !"

His fun over, the stringing me along, he laughs and says, "I bought it for you, silly. I didn't want someone else to get it. Eddie wanted out." I started to say the obligatory, "I'll pay you back," but he waved it off. "What's the difference?" he said, which is true. When you're extremely rich, and you're friends with someone, the rest is just laughter and backslapping; no one's in anyone's debt, he's just happy to do it, and in that spirit, I accepted the keys.

We did get down to some serious stuff, when he said that friend and confidante Garrett Al (aka Geritol and Jor-el) filled him in on the whole Pink Professor situation. Of course I know the Pink Professor through the Roadhog; it's our basic rendezvous point. But he's been MIA, after an argument we had a few years ago over meditation practices. And I want him back, but where to look?

The billionaire said, "You know I stand ready to help with anything you need in the search. I want to wrap this up ASAP, because I don't want you suffering, OK?" I nodded and kept my head down. He saw that hint of pain and exclaimed, "OK, that's it! I'm now in charge!" I was speechless. What can you say when you have a friend so doggoned filthy rich and dripping with confidence, but "Yes sir!"

We sat and he said, "Tell me everything you know." The discussion went on for quite a while, as I shared with no real goal, since I didn't think I knew anything. "Tell me everything you've ever talked about, and don't worry, I respect your privacy and won't share it with Geritol." (Jor-el and I have a history, and whereas I'm not that hushed mouth around him anymore, it's nice to know my dirty laundry won't be hanging in plain sight.)

After an hour of sharing, the billionaire exclaimed, "I know where he is!" taking from our conversation this one little obscure nugget. "You were in San Francisco in 1975. You spent a night under an interstate bridge. You told the Pink Professor you left a piece of your soul there. Your argument was over kundalini meditation. He went there to find that piece and reconcile himself to you." I filled in the rest, "But he's blocked, and now can't come home, analogous to failing to attain samadhi in yoga, till he restores and completes me." The billionaire nodded, "I suspect as much."

He said he'd handle the preparations. I would spend the day tidying up the Roadhog bar -- Eddie left some dust bunnies behind -- while he would oversee construction of a blimp and a full blimp port. We would find the Pink Professor and bring him home in style!

That was a couple hours ago. I brushed my teeth, went to the bathroom, and for 20 minutes was sweeping up behind the bar -- thanks, Eddie, the dust bunnies were dinosaurs! -- then took a load of trash out back. Some guy's sleeping in the dumpster so I had to leave the wastecans next to it. Looks to be a good day.
Posted by dbkundalini at 1:06 PM