Pillow Talk with The Pink Professor 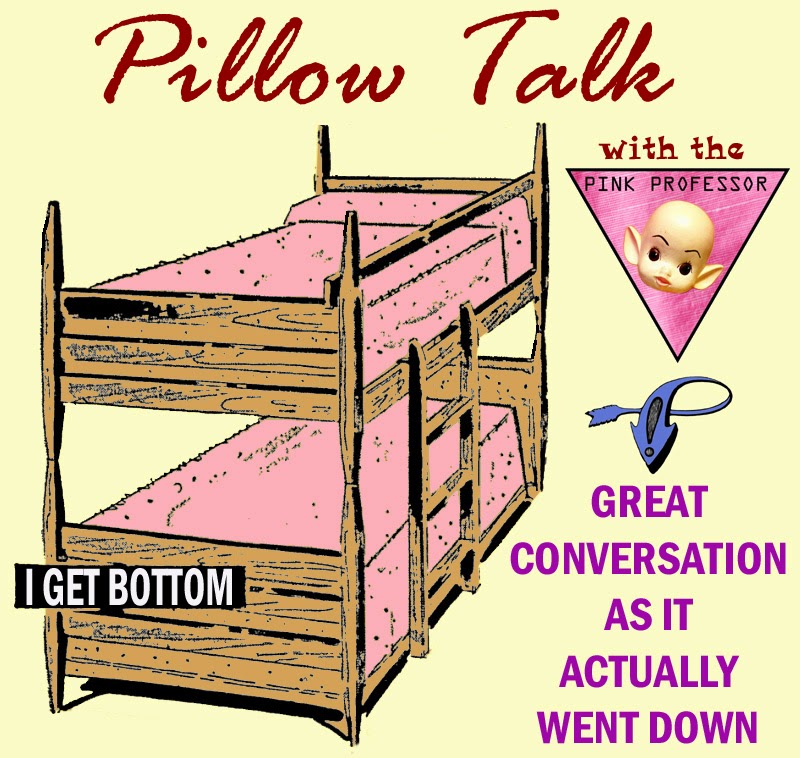 How do you like being invited into the bedroom of a couple bubbly newlyweds? It feels kind of funny that you're here, probably to you too, but since it was my idea, I guess I shouldn't complain. Anyway, don't touch anything. I don't know what The Pink Professor's packing, that is, in his luggage or what's in the dresser.

If I get chatty -- I'm try not to -- just remind me, There's places we shouldn't go, TMI! Really, though, we're all adults here, right? I wouldn't dare let anyone in under 18. Wouldn't want anything nasty to slip out -- accidentally or on purpose -- and damage their little ears! Like this pillow talk stuff. Which isn't meant to titillate -- honestly! -- but to inform. Really, to fill you in on mutual friends, since by now, we're all friends with the billionaire and his new husband Garrett Al (aka Geritol and Jor-el).

Last night was Pink's and my first official night here, but being longtime buds we have a lot of experience with this kind of chit chat.

Of course Pink wanted to know about me and the billionaire. Pink was in San Francisco when the billionaire showed up at the beginning of April. So what about us? Seriously, nothing happened! Yes, we were together so much that people seemed to think we were a couple. Like when we got the key to the city, even the mayor called us a couple! But it wasn't anything like that. He was just a very kind guy, and we hit it off like heart friends.

What about Garrett Al and the billionaire? They got close and I didn't even notice it for the longest time. I thought Geritol was maybe employed by the billionaire. But looking back, I'd guess Geritol was probably the aggressor in their relationship. The Pink Professor already knows how Garrett Al came on to me when we first met. Before he knows the boundaries, he tests them. The billionaire, being a straight ahead guy, no doubt liked his forwardness. Plus, remember, Jor-el is basically reformed and can be very charming.

Pink steered us to what could've been a sore point, a consideration of what to do with all our money. I said, "Well, it was a gift to me, but now that we're married, of course the assets belong to both of us." I figured Pink was not comfortable with that much money, close to $2.1 billion, plus it being a gift from the billionaire. But, really, it hasn't changed me in any way, except for that whole unpleasantness with the Biggest Book Sale in the State, when I wasted $10 million for 300,000 books. A real regret.

Pink broached the idea of us being generous with the money, to do good. Which is exactly what I love about him. He's the world's greatest optimist, and he has reason to be; he's seen much success in his work for other people's good. Obviously, I was agreeable. Selfishness with wealth is never really good. It can corrode your spirit and your feelings for community right away. On the other hand, waste not, want not. I sent $10 to the Cancer Society earlier this month, which ought to hold them a while.

The Pink Professor asked me if I was still a big fan of Elvis. I smiled as if to say, 'Once a big fan, always a big fan.' "Of course I am. I dream of him almost every night, like always. But now that you and I are married, I promise not to!" He looked to see if my fingers were crossed, but since they weren't, I'm OK. Until I wake up singing "Hound Dog." But I might be thinking of Garrett Al...

Without giving too much away, it being our first night and all, I was very tired and wished him a good night. But I was suddenly roused to new life when I noticed ... feet on the ladder, coming down! "Mother!"
Posted by dbkundalini at 6:54 PM