A Cob Up Everyone's Bottom 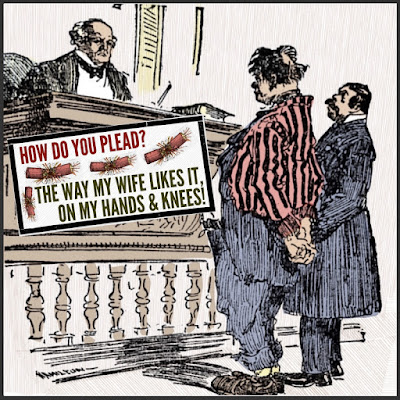 Here’s one that centers on a profession I probably should have followed, the law. I think I would’ve made a good lawyer, since I've always been so worried about doing something wrong and getting in trouble. It would pay — say I memorized everything legal and illegal and searched it for excuses why I didn’t know the difference. People would be coming to me like the legal eagle I’d be. Nobody would get away with anything because I’d be there forever suing for damages and banking the profits.

My dad said he always wanted to be a lawyer but he never got up and did anything about it. Just sat on the chair telling everyone who went by, “I wish I were a lawyer.” Since there’s a law office every other door downtown the places we lived, it was like saying he’d like to breathe. No one else was saying it, so why didn’t he just be a lawyer instead of yammering about it all the time? With the same thing going for me. Now that I’m old and out of live options it’s amazing to look back and see all the options I used to have, which at the time seemed completely impossible and far off. I might look into a lawsuit against those who beclouded my imagination and fogged my sight when everything should’ve been clear.

Here, though, we see our rodeo friend, Omar the Tent-making Clown, standing before a most dour judge -- who obviously had lemonade for breakfast -- and is now either extremely serious about the law and its so-called sanctity or has a cob wedged in a particularly personal body cavity and might actually have lost it sometime in the last day. That’d never happen to me, of course -- body cavities are for natural processes -- but if it did I dare say I wouldn’t have the clarity of mind to render a fair verdict; I would’ve gavelled the proceedings closed at least long enough to extricate it, explaining demurely that World War III was taking place in my pants, and on the off chance I failed, I'd look for a discrete physician to help, someone who thankfully didn’t go into law instead.

Omar’s trouble before the judge — and I’m not judging the judge's choice of personal toys, although something made of plastic or one of the more supple plastic-like materials is a lot better than an actual corn cob, which has a lifespan of what? A minute under ideal conditions? Let alone the heat of a cavity like that, the moisture, peristalsis. The fact that you’re in court is a problem too. You can’t be worrying about something getting lost and working its way upward — I suppose it’s possible, why restrict gravity’s self-defining choices — and making its presence known at an embarrassing point in the proceedings, just as you’ve made up your mind to hang Omar. The gales of laughter would ruin your credibility. And everyone’s appetite!

Well, as it turned out I didn’t save the day legally, but during the three or four recesses I managed to plant enough doubts about the judge’s sexuality — human, animal, or mineral — that Omar's next court date is in 10 years, probably five years past his life expectancy, going by what’s typical for rodeo clowns who've been in legal trouble.
Posted by dbkundalini at 6:00 AM