Beg For Your Num-Num 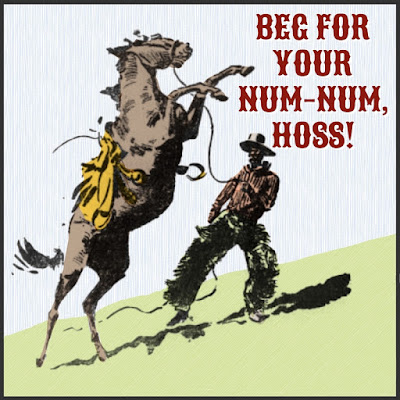 We live in interesting times in terms of our expectations, what we think we deserve and what we can have. I’m thinking in particular about the whole issue of eating, the meals we’ve come to expect, and the meals we often down without so much as a moment’s reflection on it as provision. I crunched myself though a handful of chocolate candy crackers and wish now I could've gone slower.

The rodeo’s close to my heart, thanks to my dealings with many of the team of Mam and Pap’s show. And they dealt with a lot of these issues of daily eating that not only the people on the show were concerned with but also the animals. In fact, the animals are more insistent, have more boldness to say it than some of the people, stamping their feet, blowing steam out of their big meaty nostrils: “I’m here, I’m hungry, feed me!”

Before I go any further, not wanting an uprising among the natives of the internet, always at the ready with a big pot of water boiling and their several spears, alert to any veering from the socially proscribed mores of life and behavior, in this context the provisions of food for all, let me say I do support eating, with full-throated enthusiasm. Like everyone, I could afford to cut back a little; it’d be nice to cinch my belt a little tighter, 10-12 inches. But that’s me, not animals who have little understanding of wise dieting and would gorge themselves to death before the 4:30 show if given a big enough feedbag.

The story I’m telling as part of the celebration of Mam & Pap’s rodeo focuses on some of the characters, the staff of their show. And there was a guy who did it differently from most when it came to feeding his horse, a decent horse named Hoss. Hoss’ human companion was Old Dan’l.

Daniel, to use his fuller name, believed that Hoss needed to beg for every meal. Maybe if Hoss reared back like that several times a day it helped him keep physically fit. And it'd be a reminder if he ever needed to see something afar he could rear back and see it. “Beg for your breakfast, beg for your lunch, beg for your dinner” was all consolidated down into a command a horse could more easily remember, “Beg for your num-num!”

Which of those words would be key? Probably “num-num,” if we’re thinking of how food seems to us, something we chew, something we savor, depend on for nutrition, and enjoy. “Num-num, food good.” Even a caveman would understand it, it’d be a piece of cake for a horse. Whatever Hoss thought, he put 2 and 2 together and associated raising up and letting out a loud whinnying as begging for his food. And was never denied as far as I know. I observed the ritual maybe 10 times and the food was quickly given with the proper stance, response, and of course the actual begging, a series of vocalized noises.

I’ve thought about that many times over my own meals. My family used to say grace over most meals. Not potato chips, but anything more. Keeping in mind old Hoss the begging horse, it simplifies it for me now that I’m on my own. Just lift my hands like Hoss does, and whinny a couple times, I know the Good Lord is satisfied. And I can partake of the meal with a clean conscience, be it meat, potatoes, a salad, etc. One thing I don’t beg for is potato chips, even though I still like them.
Posted by dbkundalini at 6:00 AM