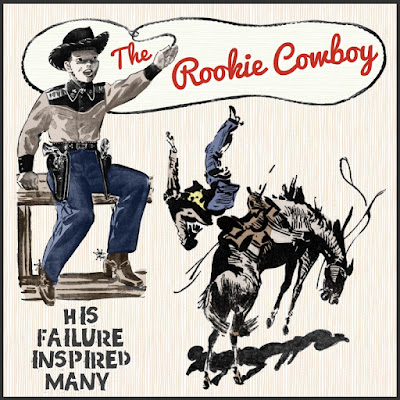 There was a guy who was a real greenhorn, if that word means what I think it means. A guy green around the gills, looking forever innocent, perpetually driven but more or less incompetent, perhaps also lacking aptitude, even basic sense, taken in with the rodeo and joining it, yet still doing some good along the way.

Like I say, this guy wasn't a quality star, or even one of the lesser lights in the universe, and you might say he was even less than a fizzling firecracker — not at all like the brightest star in Earth’s darkest night — but he still had a purpose. His purpose was to inspire others to be yearn to be rodeo stars, holding on to the very good chance that they would exceed him in ability. I still call him the Rookie Cowboy, never maturing to be any good, just forever maintaining his place, his purpose, and his surprisingly good looks.

“Hey, Babyface!” they’d call out to him after a painful spill. He’d grimace, get a snarl on his face, and seem to be cussing under his breath, hoping the pain would go away, and that they'd see only the smile on his face. Someone might say, “Oh, nursing some wounds, huh? Got bucked off again? Landed on your head? Be careful, you don’t want to lose your looks!” After a bit he’d brush it off and climb back on the animal again, so he had optimism.

Mam and Pap’s rodeo got a lot of good talent over the years inspired by the Rookie Cowboy's troubles, those who’d just turned 18 (let’s say for the sake of argument) and others who might’ve actually been 18 or over. With a hunger for the life of travel, the smell of animals digesting in the morning, afternoon, and evening, and heart-stopping competition, the kind of romantic daydreaming you read about in the cheaper rodeo magazines.

Pap told him, “Babyface, everyone starts out somewhere and everyone ends up the same place, on their ass. See those impressionable young guys in the stands? Most of them have just one purpose in life. Their path has led them to the rodeo, a life they’ll love like you.” And indeed it was so, the life of the rodeo, one of life’s choices that once you’re on the road you come to tolerate more or less as an OK thing. You get to see a lot of one-horse towns, and tent living’s not bad if it’s not raining and there’s not the slightest breeze. And as long as someone pays you, you tolerate it like any other job.

So Babyface was in the rodeo! Good for him. Even though he never made the record books, and we’re even considering the fact that rodeo record books are easily forged. But he did set a record of sorts for enticing a generation of young cowpokes to excel at clowning, ride the bucking broncs, bulls and other animals, and of course maintenance. If you run into him, ask him for a bubblegum cigar. He once did a lot of good with that friendly gesture, impressing younger fans everywhere he went.
Posted by dbkundalini at 6:00 AM