Mam & Pap Get Together 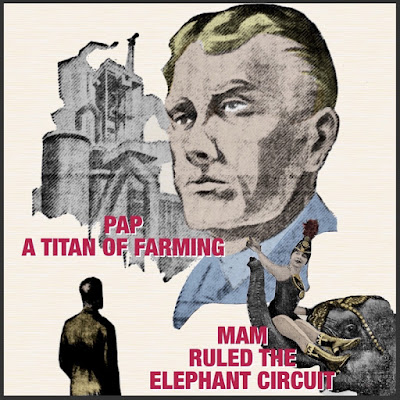 I made the point yesterday that the famous Mam & Pap of the rodeo passed on a number of years ago. Mostly because they were born quite a while ago and it’s just in the nature of rodeos that if they’ve still got their actual founders in charge they’re relatively young as an outfit. I’ve had many foolish wishes that life could go on forever — I wish, I wish, I wish — but realistically there’s a terminal point for everyone.

Of course the heroes we have growing up, it's easy to picture them still out there somewhere. Even if they're not over the next hill, they're in our hearts. And we have some comfort in the idea that life goes on, tempered only by the realization that if it does it’s in some dimension that's not exactly what we'd want, but still better than nothing. The giants pass and we deal with it the best we can.

But death doesn’t stand in the way of the greatness of their lives. We have our memories, and if they’re supplemented by some fantasy and complementing embellishment as to their qualities, their stature, and their accomplishments, that’s also a good side of eternal life. I want to touch on these two heroic lives and I’ll try to keep it “down to earth.”

What can you say about Pap without losing your breath? They always said he was a worthless piss-ant that’d never amount to squat. I say that through tears of love. I myself have been called a worthless piss-ant and that’s my cross to bear. But Pap did something about it. His own Pap was a worthless piss-ant who never did one good thing but plant the seed for his son Pap. The son Pap then picked up the opportunities that came his way. He dropped out of school on the first day and set about making his way in the world at the age of 5. He picked up what he needed to know. And sneaked into movies to learn the rest, including the influential film, “Rodeo Roy, The Five-Year Old Piss-Ant That Made Good.”

But it wasn’t immediate for Pap and the rodeo. He also saw the film “Hucklebuck The Farmer.” With Pap’s natural talent to get an idea and accomplish it in the next five minutes, he started with a single row of radishes next to the house and advanced swiftly to become a titan of farming. He once owned the entire state of Kansas, then later parceled it out to homesteaders down on their luck. Mam also came up the hard way, like Moses. But instead of ruling Egypt she became involved with elephants, having removed a painful splinter from an elephant’s trunk. Because elephants never forget … to make a long story short, she was recognized as the ruler of the entire elephant circuit. And anyone that lucky was bound to find Pap. They made their home together.

At that point it wasn’t a hop, skip, or jump for them to say, “Hey, let’s do something! Let's trade it all in on our own rodeo!” And so it was, followed by people coming by train, plane, automobile, or rickshaw, and even sometimes horseback, making their way en masse to Mam & Pap’s rodeo, like refugees seeking their own homeland in a strange world suddenly compassionate toward immigrants. Mam and Pap gave succor to all, and that’s a standard they personally guaranteed in their great run with the rodeo!

(Without getting into the thicket of issues, we do not endorse the corporate version of the show today.)
Posted by dbkundalini at 6:00 AM