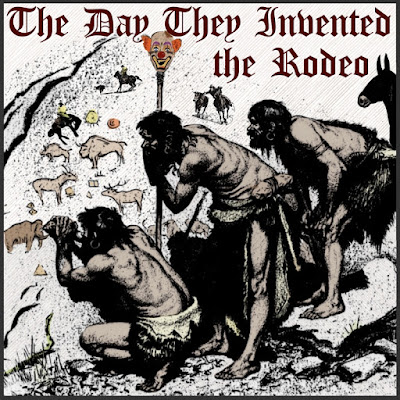 While we do not possess records of the exact day they invented the rodeo -- for all we know it might've taken a week -- the very existence of the rodeo points to the definite fact that it happened. And like so many things in history, it may even have happened more than once! Because in millions of years many things can happen, the idea fizzles when they put it on hold, then it's taken up by a later generation.

We are not completely in the dark, though, because there are cave etchings from some of the world’s best and oldest caves that reveal all sorts of things. Naturally we know about domesticity from cave etchings. Early man sitting on the couch and the kids underfoot. The division of labor between the sexes, men getting the kids off to school while the women took the more natural path of hunting and gathering and protecting the community.

Then there’s the famed etchings of animals, animals of prey, animals for food, for domestic use, and, more interesting for us today, the first glimpses of pens, bleachers, crowds, in short the whole rodeo in rudimentary display. Archaeologists only wish they could see more, for instance to be able to read the programs they held in hand, apparently telling of the events, the performers, and even the communities involved. The mere etching of a single vertical line has been interpreted as the first claim of a particular rodeo that “We’re Number One;” imagine what we could do with a whole file cabinet.

My own thought on this is that while it is interesting, I wouldn’t pin too much research on etchings. My first thought is always “People are people, whether they lived 10,000 years ago or last week.” Which simplifies things considerably, so we’re not just gazing at scratches but observing living people -- some of the same characters we know today, the good, the bad, the ugly, the really ugly, and the so-ugly we move to different bleachers. My basic overall theory is what we do now, they did then.

This theory's a great time-saver, too, because we can skip caves all together. Examine what we do and there's your answer. The only point of discomfort I’ve seen so far is having to explain it continuously to the various idiots at shows. They demand, “What are you doing under the bleachers?,” thinking we’re trying to look up their wife’s dress. “Nope, nope, just anthropological research, we’re exploring primitive rodeo attendees from 10,000 years ago by observing you in this modern day!”

While the research is extensive, it didn't take long to determine that ancient man at ancient rodeos were very finicky about researchers observing them that closely. Even back then they were anxious about their privacy. They may have worn skins nothing like our clothing today, but they still didn’t want anyone getting peeks, particularly at their women. Then as now, they wanted to enjoy the show without having to worry about researchers crawling the crowds pretending to document their lives while they were busy looking for action of a more carnal sort.
Posted by dbkundalini at 6:00 AM