Complaints Against The Fans 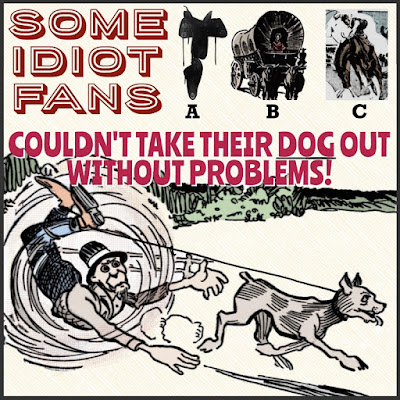 This is the kind of thing we don’t put out very often as part of the history of the rodeo and more particularly from Mam & Pap’s show. About occasionally complaining about the fans, even though of course they were their bread and butter. Sometimes, though, whatever line of work you’re in, you've just had it up to here and want to get in their face and dress ‘em down good, “You don’t own me, you scrawny necked local-yokel barber, so get out of here with your stupid complaints! And by the way, the guy cutting your hair went about three inches too high in the back and the entire back side’s sun-burnt!”

Really, complaints are never welcome, and for that matter neither are suggestions. My take on suggestions is they’re just complaints with sugar on them. Any idea you have that you can do it better, either do it or shut up. They'd say, "As long as you’re coming to my rodeo and putting down 50 cents to get in, you’re paying me, I’m not paying you. So zip your lip or you’ll get a fat one and the zipper won’t work! See that horse over there kicking the crap out of its stall? Well, a mortal threat is an actionable offense, so I’m not going to tell you what’s about to happen to you!"

And, yes, there’s always been some fans who take it too far, get out of line, cross the line, get bossy, and need to be knocked down a peg or two. Some are so bad they might have an accident; I’m not saying they ever had an accident. But a few got accidentally entangled in the apparatus that ferries the saddles back to the storage wagon — even some visiting cowboys got the crap kicked out of them and their saddles needed cleaned. When someone’s entangled, naturally the apparatus doesn’t know a trapped customer from a saddle. So if you’re hooked to it there’s but the one destination. And it’s all very unceremonious, being dropped from 10 feet into the air on a pile of muck. At its cleanest there’s still enough base residue that you better not land face-down, you’d smother in 20 seconds.

I think there’s a place for suggestions. That sounds reasonable, right? You don’t think the taffy has enough genuine strawberry flavor, certainly Kindly Kate will take your mildly-suggested complaint in her usual kind way. Whereas the rest of us, you want more strawberry flavor, here you go, smart guy, choke on it! He’s so pumped up on strawberry flavor mixed with laxatives, you'll hear him sputter all the way home! Or as far as he gets before he blows up and some of the more discerning ladies even at a distance get into a free-for-all whether the air's flavored with strawberry or one of the horses is dying of encopresis, a stool issue!

And if that doesn’t soil your drawers to your liking, how about this? I don’t know, it's probably mean and childish. Try this little quiz on these Know-It-Alls: Out of A, B, and C, which one is the guy on the bucking horse? Ah, let’s just skip it, that might be getting a little too mean toward the old ignorant paying customers.
Posted by dbkundalini at 6:00 AM