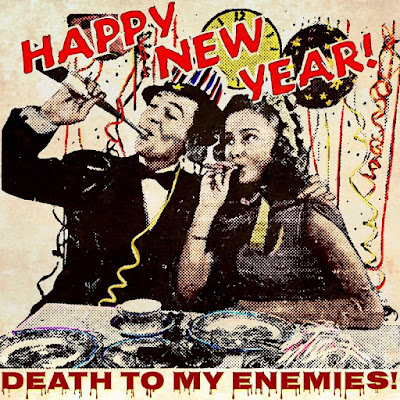 “May old acquaintance be forgot and never brought to mind...” We sang it last night at the local ball, a gala affair. I shouted at the top of my lungs for a "Happy New Year!" to my old community, town, and burg. Even though, let’s be honest, what've they done for me? But it’s the holidays! And if Christmas this year taught me anything, thanks to a rare movie I saw, it's good to live right, God bless us everyone.

That said, I frankly wouldn’t mind if a few of my acquaintances could be forgot, with the extra bonus of being never brought to mind. Yeah, that’s the ticket, I could use that for a New Year's gift! Perfect for the bastards ... and a few beyoches thrown in the mix. That's women’s progress, right? Having them right in there with the bastards, making my life miserable to the best of their ability. They may be ham-handed morons at everything else life throws their way, but they're experts at being bastards, real pros! No one's gotta lend a hand, they got it!

But it’s tough to open the New Year on a down note, although, frankly, this morning I’m high as a kite. I had a few good dances last night. There was this one young chick, wow, young, must have been 19-20 — I didn’t card her, that’s the doorman's job. And here I am, nearly 67 (but I could pass for 64), dancing with this little filly. Ha ha! Like dying and going to a particularly decent section of heaven, where everything’s blue and the Lord hasn’t gotten around to censoring it. Slow Lord there.

Anyway, she’d had a little too much to drink, thankfully, and I was stone sober like always. And I’m not saying she exactly went overboard with the close dancing — I’d never make that complaint — I'm just glad her dad wasn’t there to take her home. Nothing much happened, I hope you understand, I’m just hoping she doesn’t name it after me! No, no, of course I kid, although, you know, as much drinking as everyone else was doing, and me with my ginger ale, I probably could’ve skipped the country and no one would’ve been the wiser. Also, I always show up blurry on video evidence, don’t know why.

Getting back to the old acquaintances, the bastards, my enemies. There were a few bullies bullying me when I came in, “Hey, old man, past your bedtime!” “Does 'The Home' have a bus outside? We’ll have some blue-haired chicks next!” And one guy bumped into me in the hat room and I dropped my keys. But a helpful angel to my right picked them up and gave them to me. I thought, God, the abuse here is atrocious!

Closer to the serving table, it was more of the same. Friendly jostling for the most part, but there’s always a few in the crowd that look at me like I’m dirt. This one drunk bastard singled me out and was calling me Seabiscuit. I guess the same as saying I’m a horse. And if I’m a horse, perhaps a horse’s ass. I’m not completely sure, but it sounded like a slur.” Make way for Seabiscuit!” He bellowed louder than he had to. The chandeliers, which my mother would’ve loved, were shaking. I thought, I’d love to squash you under my hoof, you blankety blank bastard!”

Then the next thing, one of these evil SOBs suddenly had my car keys again! It was a pickpocket job, just to get my goat. As luck would have it — HIS — he was about two foot taller than me. And his equally asinine friends were nearly the same height. And they were throwing my keys back and forth, with me looking like a complete dweeb jumping in the middle. This went on for a couple minutes, very humiliating. Finally, one guy wasn’t expecting the keys to come to him. He raised a glass to sip another alcoholic beverage, when the keys were flung. He missed and they went by his feet. I grabbed them and crawled through the legs of several other people, bit the actual thief hard on the kneecap, then didn’t come up till I'd crawled to the chips and dip table.

I brushed off my knees and had a few chips. The dip was delicious, sort of like the way one of my aunts used to make it, very good. If only she’d been there. Kids used to say she wore army boots. And even though I never saw them, if she’d been there, she could’ve kicked these guys to the next county.

Happy New Year to everyone else who is good. But Death — temporal and eternal — to the various mofos there are in the world that hate me, Exhibit A being those guys and some of the other troublemakers, as well as the usual everyday people who hate my guts.
Posted by dbkundalini at 6:00 AM