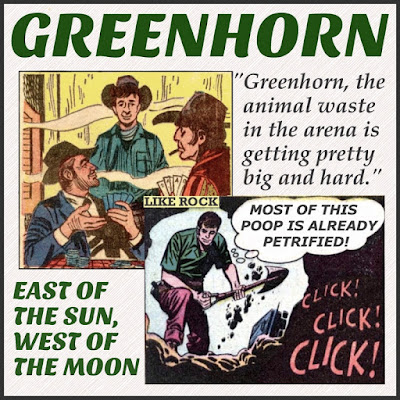 Some might say it’s “Just Another Greenhorn story” — similar to hunting snipe but different in the sense that he’s doing real work, trying to make a difference. The rodeo has some work that take humility to really get in there and do it. You seek encouragement but so often it's a thankless job.

One of those jobs is mucking out stalls, that little sliver of land where an animal stands. Natural processes take over and they need tended to. A greenhorn looking to get his feet wet usually gets tabbed to get in there and be a difference-maker. And he’s encouraged occasionally but often it’s a stage in his tenure more or less transitional — today the stalls, tomorrow the main staging area! Potentially the world. If he hasn’t left the rodeo field and perhaps gone into a less honorable profession, medicine or banking.

It’s being a greenhorn that, even if the rewards aren’t immediate, they eventually come. You could get a good referral: “Jed was an excellent mucker-out of stalls, clean as a whistle.” But along the way, often — and it’s all in good fun — he might get pleasantly razzed. Because as we all know, most guys stumble-bumble in their earliest jobs. Maybe they came from a family where Dad was a banker and that was it. Privilege.

But one day he sees a sign about the rodeo, "Help Wanted," and he's soon up to his boots in it. The other guys look and see he’s got a pile mounded up pretty tall and it’s ripe. He calls to the men asking what he should do with the waste.

“Well,” one chiseled old cowpoke lazily drawls, very lazily, before spitting out the juice of a plug of tobacco the size of Texas, “If’n it ‘twere me, I’d cart it somewheres really good, east of the sun and west of the moon.” He cackles with laughter, then chokes on tobacco juice and hacks till he nearly strokes out. The others have heard the joke before yet still resonate with it, high-fiving each other.

There is then the greenhorn, repeating the east-west coordinates as outlined. He wonders where that could be. “The sun comes up in the east, but west of the moon could be anywhere. And by the time I got it either east OR west, both sun and moon will have moved and it’ll be all wrong."

Not to belabor it forever, the greenhorn carts those piles here and there, bringing in new piles, making the carting-about of it an intricate and ever-changing dance, until — I hate to say it — he was discouraged. The other rodeo helpers came and gave him the full scoop: “Over there’s the muck wagon. Put it there and the foreman will have someone pull it to the edge of town and shovel it in the ditch.

And it worked out exactly like that, a fitting place for it — a place occasionally east of the sun and west of the moon — with the greenhorn maturing and becoming a decent laborer. He earns his keep in a responsible way, like the horses and bulls themselves.
Posted by dbkundalini at 6:00 AM