Rodeo Done To Death? No! 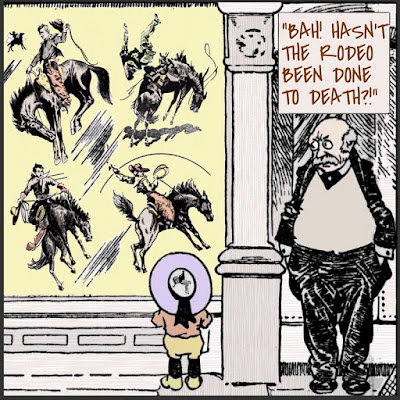 “O the ungrateful merchants of this town, disparaging the great rodeo coming to town, bringing in lots of consumers, shoppers, people who will be dropping quite a bit of money while there to enjoy the show!” Done to death?! That's just one of the righteous slings and arrows that goes with the territory when you’re in the rodeo business, doing your level best to put forth the best talent, the best show, all priced at family-affordable prices, basically a drop in the bucket.

The Mam & Pap Royal Splendid Traveling Rodeo never showed up to no acclaim, since the fans were many. That’s why the rodeo carted bleachers everywhere they went, because all those devoted guests needed a place to sit. And when they were away from the grounds, maybe staying with friends in the area, it’s more than likely they would need services in town, a bite of food for the road before they headed back home, and some gas.

I’m probably too quick to jump on this guy for his disparagement of the rodeo, but it was drilled into me from childhood to stick up for the little guy. And I see a traveling rodeo as strong in one sense — a great tradition, talented people, and family values — but I see them at the same time as vulnerable. Because an evil word spoken against them by an unthinking "critic" carries a lot of weight. Just a casual comment like this guy makes, grousing, ungrateful, really works against his own town's interests… You just want to say, “It’s your funeral, pal.” And then watch him in a fit of guilt, grasping at his heart, the veins popping out on his face and neck ... you get the idea. But that's probably not nice to say, forgive me. But what's left? Take the time to reason with him, I guess that's always best. Except I've known plenty of losers that looked and sounded exactly like him, and their whole excuse for living is to bring everyone down.

Anyway, this is years later, let bygones go the way of all flesh. At this point I don’t see many traveling rodeos, not like in the heyday. No sir, they weren’t done to death. If you think of it, those were the liveliest days. It was often losers like this guy, "O! It's been done to death" that did them to death. I take exception to that. There's limited ways the horse can jump and cowboys can fly in the air, so in a surface sense maybe it does seem like it’s “been done to death.” But that’s in the nature of movement. Yes, once you’ve seen it a hundred times you wonder, Are there any more tricks? Well, these aren’t tricks but natural moves. Just like we wave at our friends on the street, we use the basic gesture of waving. We aren’t looking for a new variety on an old custom.

Can I make that any clearer? Animals move in particular ways. Up and down, side to side. Bucking has a particular look and leaping a particular look. These moves have been developed in two stages: 1) The Good Lord created him with legs and certain muscles; 2) Through evolution legs and certain muscles formed in particular ways, in an environment and for purposes useful as determined in the evolutionary scheme of things. At this point that’s how they work. A horse can twist in turn in a variety of ways, but the basic jumps, etc., are going to look similar.

The guy on the street is very shortsighted, and it's no secret I don’t like him. And my other gripe about him is, Don’t discourage that kid. I hate it when anyone discourages a kid like that. Put your best smile on your face, be nice to the kid, affirm his or her love of the rodeo, etc. Always be an affirming person if you have the opportunity. Dude got me riled up something fierce!
Posted by dbkundalini at 6:00 AM