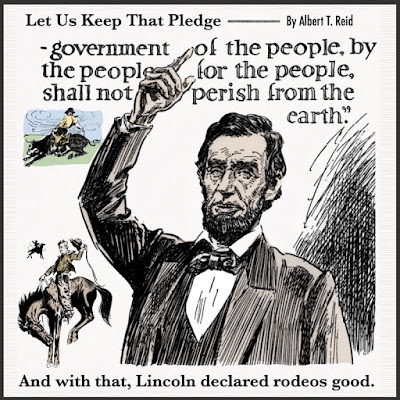 All roads, when you’ve taken one, finally, inevitably converge at Abraham Lincoln. That's the magic by which he became president. He'd had his hand in the game for 4 million years, when inevitability finally won out and bore fruit sometime between 1732 and 1865. Which went double for the rodeo, because if they had anything up the yin-yang in the old days it was magical happenstance, plus, different from us, a clamoring for horses and rodeos. Horses jockeying for position, jostling one another at the starting gate or just breathing freely on the avenue.

Look more closely and what do you see? A farmer brings cattle to town. The wife’s low on pin money. But with cattle you have confusion, always grubbing somewhere for something to chew and finally needing to be content with their cud. So cattle and horses were together on the street, with a cop trotting by. From his patrol horse he surveyed his domain, the great center of democracy, the poop-strewn streets of Washington, D.C.

The Great Emancipator himself held forth in the Oval Office, “Close the window, the wind is from the streets. And you,” turning to one of his most trusted grunts, “Smegma, get me the latest data from the patent office, is there any word on key patents toward the mass-manufacture of automobiles? The day we drive horses into extinction will be a proud day in the history of breathing.”

Of course I have only limited notes on what everyone said. And though I’m one of the country’s foremost historians, even I have never been interested enough to get down in the weeds of history and grovel for everything that’s ever happened or been said. If you ever try it you’ll find you’ve given up your own life — and to me the best invention aside the fully-tilted-back saddle has to be the easy chair.

But all was not rosy that day in Washington. I hate to throw in a sad note, but it was a truth the world had to face sooner or later. Lincoln’s own assassin — and I won’t dignify his name by looking it up and reciting it here — rode a horse. Which tells me something I never thought I’d share with any living thing, that in the ambiguous weeds of existence (horse or no horse) there’s a lot of evil mixed in with the supposed good. Yes, philosophers have always been familiar with the weird juxtaposition/play of good and evil — you can’t have one without the other — but it took by surprise even them, exactly what depths could be plumbed and how long someone was willing to do it to discover the whole hideous truth: If you think horses have ideals, it’s time to look for new opinions.

Yet, even against those odds, once rodeos got going it was mixed with anguish — weepers beating their breasts, crying out, “Why! Why!” Until finally they saw the light of day breaking through, which changed their tone: “An ambiguous evil can lead to an unambiguous good.” And on that principle — tangentially related by hook or crook to Abraham Lincoln — the modern rodeo was born and pronounced good.
Posted by dbkundalini at 6:00 AM