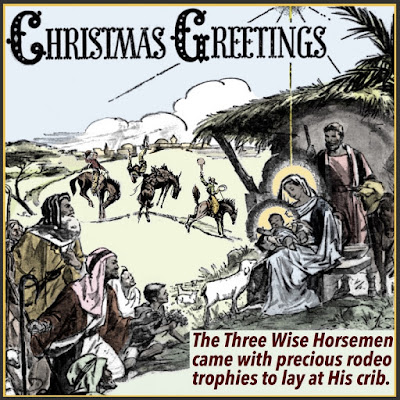 Christmas is one of the major holidays in most parts of the known universe. You're always running into someone who celebrates it. I also send out my personal Christmas greetings to one and all. If you are even now receiving my greetings, please receive them as something that it’s my pleasure to send. I hope the joy of the season — in vast quantities — will be yours today. And that if it's somehow able to be sustained that it will continue to be an encouragement to you, extending well into the New Year. My feeling on it is so big that if I could personally land on your roof and shimmy down your chimney and come up through the heating system and personally bring holiday cheer to your breakfast table or bathroom — anywhere! — I'd do it. Well, here I am.

Almost everything I know about Christmas I learned from family and the decorations we had. Among the decorations were the Christmas cards we received throughout the year. And because I was from a family that also went to the rodeo every time it came to town we were even remembered on their card list. How we rejoiced in the goodness of the season, thinking back to the very first Christmas when rodeo cowboys traversed afar following yonder star to where the Holy Family had put down stakes. There on the west side of Bethlehem’s fairground complex, the rodeo faithfully took place year after year, in rain, snow or ice, as long as the temperature was above 40 for the sake of the animals’ health.

The whole idea that the Wise Men were wise is no doubt tied in with the rodeo. Because it’s a hundred percent true that there’s no one as street savvy, mentally tough, and rough-cut good as rodeo folk. You tell them their mission — be it walk a bronc 10 miles across the desert to loosen up its tendons — they won’t utter a peep, except to say, “Which way you want me to go? When shall I be back? What if we get lost or separated?” And a host of other questions to cover the territory. Then once they’re gone and there’s no one to talk to, they’re very quiet, muttering to themselves or complaining to the animals about the difference between a vital task and busywork.

Let’s assume the earliest wise rodeo men, once they learned of the coordinates of the Christ child, went forth on their task with a lot of motivation to get there and behold this glorious site that they themselves had only known from Christmas cards. To have it all “come to pass just as the angel had spoken” would’ve been something to treasure in their hearts indeed and brag about on future nights while other less fortunate rodeo men were gathered about the campfire. There would be very little actual proof that they were the ones, but wouldn’t it stand to reason they were? Why would they say they were if they weren’t? It’s not something the average guy would believe, but maybe they would because who would make such a claim? “You have to know we don’t expect you to believe we were there. But why would we waste your time and ours saying it if it weren’t true?”

They had that argument, yes, and more importantly the power of their changed lives. For indeed, having seen the Christ child on that very first Christmas made them the best rodeo men in every way, including character and temperament! May it be said of each of us today, “I was there too. And if I wasn’t, why would I now be saying I was?”
Posted by dbkundalini at 6:00 AM