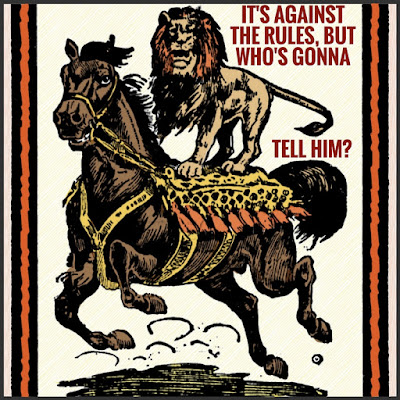 This one was supposed to be just something fun Mam and Pap put in the show once. Thinking they'd have a real distinction to be the only rodeo with a lion riding horseback. But instead for a while they were known for a tragedy. Unfortunately, the whole thing was a great disaster, and there may still be a few victims somewhere still waiting for settlements. The rudimentary sketch just before the mayhem show a lot of potential for a decent show, but lion/horse acts now seem doomed from the get-go.

In my opinion, and I see some of the trouble in the sketch, the horse was fairly afraid. And the way it is with animals — it’s the same with us — fear is contagious. The horse was afraid, the lion picked up the vibes, the horse became more afraid, the lion took on a bad vibe overload, and next thing you knew the lion leapt to the rafters of the rodeo tent. Swinging back and forth on the horizontal beam, he slipped into the stands. The panic of the crowd, while they should have remained calm, good advice always, was out of control. It’s a terrible thing to spook a lion. He went ballistic, his natural instincts being a predatory outlook when provoked, he took this very convenient opportunity to act out, and — please bow your head for a moment’s silence — several spectators were … unfortunately … lost… And a couple others got refunds.

Naturally, the horse was somewhat to blame for the mayhem, since when the lion leapt for the rafters he went straight up the horse’s neck, digging in for traction. Without featuring violence for violence’s sake — something I hate seeing in anything I read — a lion’s claws can do some serious damage and cause substantial grief in anyone or anything unfortunate enough to bear the brunt of one's earnest takeoff. Remember, a lion’s nothing but an overgrown cat, and like cats at home, they can rip your couch to shreds without even trying. The house cat, though, is quiet, unlike this roaring lion and the cry of dereliction from the horse in its terrible agony. I wouldn’t have wished that on my worst enemy, if there was ever a horse I considered an enemy.

Once in the rafters — again, the lion being an overgrown cat, really good for nothing but living in the forest — he was at a dead end and leapt for the side of the tent, completely out of desperation. His claws hooked in the cloth firmly, but with his weight he went right down the side, ending up with a rift in the tent from top to bottom. Screaming people fled through the hole. The lion, having freed itself from the cloth entanglement, fell the last 20 feet and crushed a young family who’d unfortunately faced some bad times just recently — little Ted’s pet mouse, a school project, had died, earning Ted a trip to the rodeo as payback.

Those with any sense — most lacked the sense not to scream during the onslaught of an injured lion — dove into the animals’ water tank. One guy — damn the luck — allergic to water immediately perished. Which you’d think he would’ve thought of before diving in. They later found a tag around his neck telling of his allergy, and advising, “If it’s raining, get me inside.”

Our hearts go out to him. Because when it rains, it pours. In a very real sense Tragedy and Violence mated that night and bore Death. Pap put it in his journal, underlining a rule that they adhered to for years after: “Do not allow lions within a country mile. They’re nothin’ but god-derned trouble.”

NOTE: No animals were injured or killed in the retelling of this fictional event.
Posted by dbkundalini at 6:00 AM