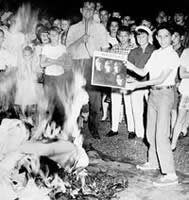 There's a reason why maniacal laughter has to be cut off at its climax, which was well illustrated in the Austin Powers movies. Because in the denouement of maniacal laughter, or maniacal behavior in general, its absurdity is quickly exposed. And one is left with the uncomfortable question of where to go from there.

The same principle is operative in very rousing revival meetings. I've been to a few, but not very many where you left with that feeling that the Spirit has abandoned you. Which would be the maniac's sense if he weren't in perpetual mania (I'll cite Saul in the Hebrew scriptures). When that denouement hits, the letdown, as it does, it's like a spiritual hangover.

You see it when someone you know "gets religion" and tries to get rid of all their sinful possessions. I've had friends over the years, particularly in record collecting, who suddenly, mysteriously, get the sense that their records are sinful and they need to get rid of everything. The cases I know of personally ended in regret.

I went to a meeting one time of a guy I will call Brother Sheridan. He had a big stack of heavy metal CDs, and now that he'd come back to the Lord, of course these were to be dealt with harshly. So he put them in a large black plastic garbage bag, threw the bag in the church aisle and was stomping on them, while carrying on in a loud kind of way.

At that time I was thinking, "I wonder if he'd mind if I asked him for those CDs after the meeting, and maybe sell them on eBay." But I didn't go through with it. He was young and very righteous, and would have been disappointed that I hadn't gotten the point.

Why do I say all this? Because I burnt my brand new Jonas Brothers CD last night, and I'm so ashamed of myself. Not only was it $15 down the drain, I didn't really have a good reason for my petulance. The offending survey surely had nothing to do with the Jonas Brothers themselves. They aren't against people who are over 35. And even if they might be, they certainly haven't shown it. Plus, there's nothing automatically insulting about saying "35+," for the simple fact that they're not expecting a lot of old-timers to be buying a CD marketed to teenagers. Duh.

But it took the light of day for me to see the facts in a clear way. That's what daylight does; it takes away the devils of the night that compel us to do weird things. I guess I was under the influence last night, much like Brother Sheridan. I was all up in the Jonas Brothers' face -- with the real problem being inside me. To think that by constructing a small bonfire and torching their CD would expel my own darkness is silly.

I will confess there have been other times when I've done this. Once in the '70s I burnt all my Tom Jones' albums when I thought I heard he was throwing his underwear at people in the audience. I thought, that's no good, he should know better than to do something so disgusting. Then after the albums were ashes in my yard I heard the truth, that women in the audience were throwing their underwear at him. I wrote him a very contrite note of apology, and, because now I knew he liked women's underwear, I enclosed a pair of Grandma Slump's bloomers that I "borrowed" off the clothesline.

So now what will I do, now that I have reconciled myself that there was no slight toward old people on the part of the Jonas Brothers? Would they like a pair of bloomers? Probably not. No. I will just say here and now how sorry I am, and maybe I will buy another copy of their CD when my disability check gets here (I have a game toe).
Posted by dbkundalini at 4:00 PM