The Democratic Convention - Day 1 and Day 2 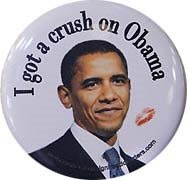 I'm "liveblogging" here, although this is a quick recap of last night's proceedings at the Democratic convention a day late, so it's tape-delayed "liveblogging":

I honestly don't remember much about last night's proceedings. A succession of poor speeches by people I didn't really recognize, and apparently that went for the audience too. The two highlights were obviously Ted Kennedy and Michelle Obama.

As for Michelle Obama's speech, she was natural, real, and wonderful. She's quite beautiful. The Obamas look so great, it's astounding.

I watched some of the pundits and not all the tepid speeches of all those anonymous Who's-That-Guy types. I think Chuck Todd repeated himself too often about what Hillary needed to do. And I think Pat Buchanan is so full of both himself and crap that the two are indistinguishable.

I missed quite a bit because I had other things to do. That would include Dennis Kucinich. I'm really sorry I missed his speech. Also the other day when I was pounding nails I'm really sorry I didn't hit my thumb with the hammer.

Mark Warner's speech -- The man is not a loser, but he is a snoozer. If that's the "keynote" speech, give me the "key" to my room, because I'm going to bed.

Brian Schweitzer's speech -- Animated like a mime, bobbing and weaving, a bobblehead. By and large a rouser, although with a semi-false tone. With some doing he finally got the crowd into it. He was OK, nothing worth waking Grandma up for.

Hillary Clinton's speech -- She needed to show some support of Barack Obama and delivered. Her speech voice is a lot like fingernails on a chalkboard, but it was the content that mattered. She got the job done and her supporters were left with zero rationale for voting for McCain.
Posted by dbkundalini at 10:54 PM