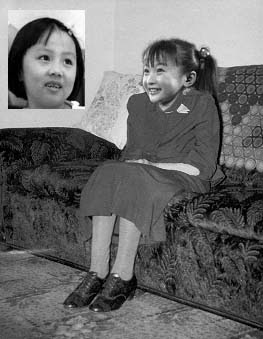 This hardly seems right. The Chinese substituted Lin Miaoke (that's her head on top of Grandma Slump's body) for Yang Peiyi (seen on the wall).

You might remember, it was in the Opening Ceremony of the Olympics, a segment that I happened to miss. They had a patriotic song called "Hymn to the Motherland."

Well, that was Yang Peiyi singing, but because she has buck teeth, she was bumped, and Lin Miaoke lip synched to Yang Peiyi's recorded voice.

She wasn't "cute" enough. Mr. Chen, the musical director, said she was "a little too old." And had bad teeth.

Just looking at the picture, though, maybe it wasn't such a bad idea. I think Lin Miaoke's way cuter than Grandma!

"Grandma, I love your body. But the white hair, the dour expression, it's just not the ideal look I'm going for. It's been great, really it has, but I'm giving your head two weeks notice."

Posted by dbkundalini at 4:21 PM