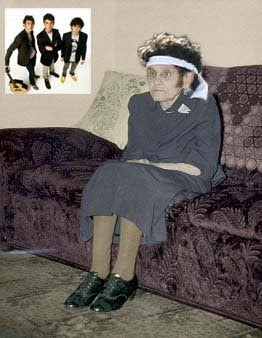 Well, we've got it in our hot little hands! "A Little Bit Longer," with 13 very hot songs, and some of the sassiest vocals we've ever heard.

Of course Grandma was very concerned about the CD case, hoping it wasn't cracked. But that turned out to be a non-issue this time because it's one of those cardboard cases with the little plastic liner. And very little else. If you put it on the computer you get whatever else there is, which is a "30 Page Experience." We haven't seen it yet, but it says it features exclusive video performance and interviews, 60 printable photos, complete album lyrics, and downloadable graphics.

But a record's all about what's in the grooves! And this is a great one. Like I said, very smart, sassy vocals, definitely calculated to tug at your inner anima in her teenagiest manifestations. Example: The talking bit in "BB Good," especially where he semi-shrieks, "I want to kiss you!", followed by a wild guitar.

The instruments are very brash, clean, layered, a great experience. There's a lot to listen to beyond the surface. Everything is instantly likable, except maybe "Lovebug," which the first time through sounds like a downer. But the second time it's great charms are revealed and we love it.

"Video Girl" is the obligatory teen star's protest against shallow girls ("I'm dating a Jonas Brother!"), the spirit of it reminding me of "Star Collector" by The Monkees.

I would say this CD is good for about 20 listens. By then the tunes and lyrics will be in your head with a vengeance, probably in your dreams. It's a very nice album, but I speak the truth about the future.

Now, did I have to fight through a mob of teenage girls to get this CD? No, there weren't any around. And was Walmart prepared, that is, did they have it stocked in the racks? Yes, but I didn't get there till a little after noon, by which time it was out, and there were plenty of copies.
Posted by dbkundalini at 4:51 PM