Our Own Little Corner of the World 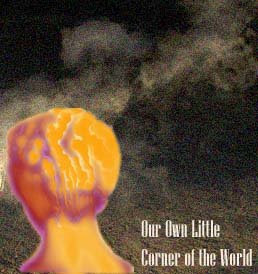 If you've ever been good and paranoid, you know that you're the center of the universe and all eyes are on you, at least the bad ones. There's a camera on every pole, a camera that an enemy has installed in your garage, recorders under the couch cushions, maybe a bug on your collar, right where they can pick up your heavy breathing.

If you've ever gotten weird calls, as I have, numbers that are unidentified, mysterious clicks when you answer, odd numbers like 999-9999, recordings that start off with "Do not be alarmed," or actual cranks who seem to know more than you want them to know, saying, "I know where you go, and I know what you do there," then you've given at least a second thought to the idea that, yes, they're out to get you.

But you tell people this -- those who are comfortable in their own skin and believe no one's out to get them -- and they start to wonder about you. And when they start wondering, the cycle picks up again, and the wondering mounts and feeds upon itself. Perhaps they're trying to usurp, maybe that weird shifting in their eyes indicates discomfort, suspicion, revulsion, mistrust, and maybe they're just trying to humor you till they can get out of your sight and alert the authorities. They're coming with sedatives, dogs, electric prods. You don't have to tell me, a guy can lose a lot of sleep sitting at the window with a shotgun. Then you start to drift off and in a confused state you start, shaking off the sleep that's come upon you unbeknownst, and in the meantime you end up sending a spray of buckshot across the lawn. It happens.

Paranoia happens, then sometimes it doesn't. When it doesn't, that's when you feel like you can be convinced that there's an entirely different scope on things. Meaning, maybe you really aren't the center of the universe. Maybe no one cares if you live or die. Maybe your spot in this world is confined to the little half acre, the little plot of land that your sad carcass is resting on right this minute. And while the rest of the world is cruising by in a convertible, their hair streaming in the wind, you're just sitting there a forgotten, unknown, neglected lump, worthless as ever. If you shoot your gun, occasionally, you'll get away with it, because no one is paying attention that closely. (You're just playing the devil, you didn't shoot your gun, no matter what ballistics tests might reveal, assuming they press the issue.)

To put it in a more positive way, there are niches, shelves, corners, and the like, and you're in one of them. If you're unknown, you are inhabiting your own little corner of the world. And you have all the privacy in the world, because, again, no one cares. If you live, fine. If you die, fine. It really makes no nevermind to anyone, men, women. They're out there, living it up, while you, in this pathetic enforced privacy are shut up, pining away, wishing, hoping against hope that maybe one of them, perhaps a good looking one, would give you the time of day. But apparently that's too much to ask, and so it goes on.

For me, I've found it's always best to look on the bright side and keep a positive outlook. When you have your own little corner of the world -- and when you're happy -- that's a fortune, it's worth its weight in gold. We used to sing that little song in Sunday School, "Brighten the corner where you are," and that's still the philosophy I live by. I have my place, you have yours, and never the twain must meet. That can be a challenge, of course, say, if we feel lonely at times, perhaps shunted off to the side of existence, out of the mainstream of life, like everyone else is partying it up while we're over here picking the scab of our many resentments, idly wondering what precisely is wrong with us? You'd think we're made of the common lump, right? Well, that might be expecting too much. You look at yourself in the mirror and you see the same thing as any other guy, and it makes you wonder, what's the problem? Because there's obviously a problem somewhere!
Posted by dbkundalini at 10:48 PM