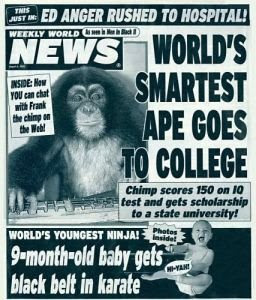 I'm going to have to start buying the National Enquirer to get my news. I don't remember ever buying a copy. I picked up the Weekly World News once but could hardly stand to pay $3 for it.

I was thinking about making a career writing for them, then they went out of business. Some of my great ideas I still have, which I jotted out on a shoebox lid:
Some of those are pretty good ideas. But as I understand it -- which I don't -- the National Enquirer is not in the market for these sorts of stories.

As we've seen in the recent past, the last several months, they've been hot on the trail of John Edwards. Perhaps he, like I, received strange phone calls, with a muttering voice saying, "I know where you go, and I know what you do there." If so, then I'm sure he was distraught. But for him -- and this is where we differ -- the whole world cares. If they ever caught me "dead to rights" it'd be one brokenhearted 104-year-old woman crying, and a half acre's worth of field mice going on their merry way.

The National Enquirer did it. They got the news when the others were sitting around, too good for actual reporting. It's just like all this nasty business of John McCain's adultery. Someone ought to do something about that story. Maybe the Enquirer will, since they have increasing credibility. It's a sad story what he did to his ex-wife. But so far he's skating by, not a peep.
Posted by dbkundalini at 7:49 PM