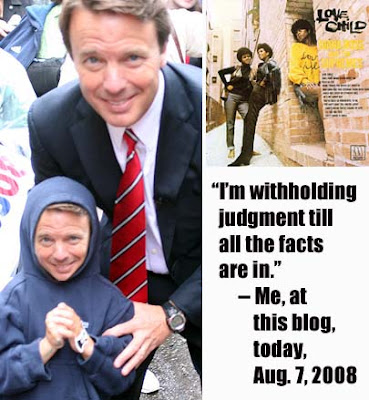 I'm withholding judgment till all the facts are in. OK, that's long enough. I see the resemblance.

I have spoken with John Edwards on two separate occasions. That is a true statement. Unfortunately for this article, those occasions were both in 2004 and would have no bearing on the content of this article.

Be that as it may, I am a long time fan of the phrase "love child." I used to read it in Grandma Slump's magazines all the time. Every celebrity in the '60s and early '70s had a love child, or wished they did. Some of course would be infertile, impotent, or otherwise incapable of fecundating or being fecundated. These were left with little recourse but to adopt a love child. Who all had a love child in those days? I can't remember. But those who appeared on the covers of movie magazines back then included: Elvis Presley, Tom Jones, Mia Farrow, Elizabeth Taylor, Lawrence Welk, and the Lennon Sisters. Put any two together and you've got a decent love child story.

It is a cool phrase, though -- "love child." You know, it's weird, if your parents are married and they have you, you're just an ordinary kid. But if there's something illicit about it you get a much more interesting title -- you're a "love child." I remember asking Grandma what a love child was. She always tried to put things delicately back then, and I believe she said it was "a baby that two people had."

When we were kids my cousin Roto told me "a virgin" was "a woman who f***s all the time." So I asked Grandma what a virgin was. And she told me that was "a good girl." Now of course I know that Roto had it backwards and Grandma was right. As for the definition of a love child, she left out one critical piece, that the couple is not married and has been doing what Roto thought virgins did.

Then the Supremes' "Love Child" record was a biggie around '68 or '69. But I don't really remember at the time making the connection between that and the wanton activities of virgins. Looking back it was sung from the perspective of the love child, now grown up, whose Mom and Dad probably never appeared on movie magazines.

Does John Edwards have a love child? He didn't mention it in 2004. But, could be.
Posted by dbkundalini at 3:50 PM