The Jonas Brothers Are So Yesterday! 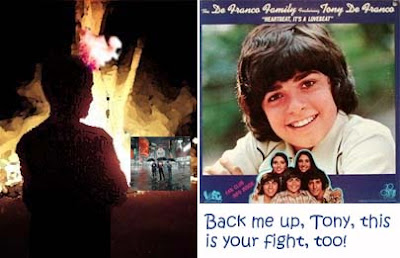 I'm starting to feel like John McCain must feel, old and out of it.

Just yesterday I was in the grip of Jonasmania and today I barely care. I can't stand them now. I'm very bitter. All because I went to their stupid website -- from a link on the CD -- and there was a survey, "How Old Are You?" And it only went up to "35+"! What's that tell you? If you're over 40 or 50 or 100, your egg money's no good, the pennies you saved, the cans you cashed in to collect nickles to buy their CD's no good. Unwelcome, unwanted!

Yes, it seems that if you're a disabled old man like me (I've got a game toe) you're thrown on the dump heap, relegated to an insulting catch-all category that only has infinity as its natural end. And pity poor Grandma, at 104, don't even talk about her! According to the Jonas Brothers, she's so far out of it there's no hope! There's no welcome mat for the aged, infirm, and disabled at the Jonas household! They'll bump and giggle at you. Boys, don't never, but never, make fun of no cripples. They have no regard for us, our civil rights. 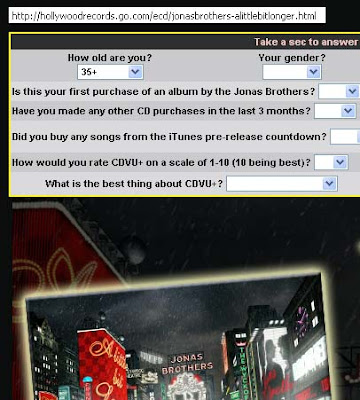 I like to think of numbers sometimes. I remember in school I had a teacher who was always saying numbers are endless. Why? Because you can always add one to a number and have a higher number! I suppose that's logical, but I'm not fully yielding to it, because it's conceivable that if you got up there to one of the very largest numbers, somewhere at the edge of infinity, that you might find one that resisted that tiny bit of addition. Call it The Straw That Broke The Camel's Back Theory. I'd love to prove that teacher wrong. He or she was so mindnumbingly stupid, it was pathetic.

Be all that as it may, I didn't know existence in the world of rock 'n' roll could be so harsh. I've always heard you're as young as you feel, that -- I'm sure there's other young/old cliches like that, but they're not coming to me. But I've just never been one to crawl into the oldies rut, even though I have lots of old records. It's not like the '50s, '60s or '70s somehow defined everything and now we should only stagnate in that swamp.

It is true I have no inclination to put "kissable posters" of teenage stars on my wall, pin-ups of Hannah Montana, love beads or whatever else they're selling. I have definitely moved on from that. The last serious temptation I had with that was with Tony DeFranco, who now sells real estate in Los Angeles, according to Wikipedia. He's also in the 35+ range now, practically 50. Probably time to take the posters down, if there's any other remaining fans out there.

In my review of the Jonas album yesterday, I mentioned The Monkees. I know that's dangerous territory in reviewing current albums. It's a dead giveaway that you're old and disabled. They were big back when John McCain was wrecking planes and becoming a hero. I was thinking of my old friend, Peter Tork, the other day. Let's see, born February 13, 1942 (I thought it was 1943). These are numbers below infinity, so I can quickly subtract here, and, what do we have? He's 66 years old. (Am I really an old friend of Peter Tork? No, but I once was friends with a guy who said he was friends with him -- true. In fact, this guy I knew said he was the photographer who took the picture of Peter on the back of the Birds, Bees, and Monkees album. So, if you're out there, Ralph, yes, it's me and I haven't forgotten! We tried to call Peter on his birthday one time in the '70s -- Ralph had his number -- but nobody answered.)

There actually was a second Monkees comment I was thinking of making yesterday, which was that the talking intro and outro to "Lovebug" is real similar to a track on Pisces, Aquarius, Capricorn, and Jones, Ltd. I refrained from making that comment because I knew I would be mocked as an old Mr. Know-It-All who seems to know more obscure Monkees trivia than is healthy. But now the truth is revealed, that I am in the 35+ crowd, a group of old fogies who don't even deserve to have an age category specifically for us! To the Jonas Brothers I'm the same as Grandma Slump, 35 or 104, we're all lumped together, it doesn't matter, just die and leave the world to us! OK, that's it, I've had it with you guys!

Their album is pretty good, but right now I'm busy constructing a small bonfire, because this sucker's going up in flames! I'm arranging some Popsicle/craft sticks in an upright triangle, tying them at the top with some floss. Now a little newspaper wadded up and stuck in the center. I'm going to put my Miley Cyrus single track I-Tunes download in with it, first burning it on a CD, and now sticking it behind the Jonas case. (She's their friend.) Thank God this thing's a cardboard case. It'll go up real pretty, not too much smoke. Now I'm going to get a little gas from next to the lawn mower, and spritz it on. Good thing they have their umbrellas up! Wouldn't want to get gas all over your nice pretty dandy hair! Here goes a match. Oh! it went out, a little breeze tonight. My hands are sweaty, getting sweat on the matchbook, hard to get good friction. OK, here goes, second one's a charm, I'll just flip it down, and poof! A nice roaring flame. The case is starting to bend and crack. There's some color smoke from the plastic tray and the two CDs. There's actually a law against open burning, but if any smokeys come by I'll -- I don't know what I'll do. Let me get it going. Just spritz a little more gas on it -- Whoa! It flared up real big for a second, might've singed my eyebrows off there! Then I would've had a grudge against these guys. Not only disabled but disfigured. OK, it's dying down now. The CD case is ashen. I can still just see the colors on the front, with the colors distorted, washed out, and light. I'll step on it and mush it up good!

So with that we bid a fond good riddance to the Jonas Brothers and their stinking CD, although it actually was pretty good. But it's my money's that was no good! People over 35 don't even deserve their own stinking age category? Well, speaking for myself, for Grandma Slump, and, of course, John McCain, someday you'll get yours!
Posted by dbkundalini at 7:59 PM