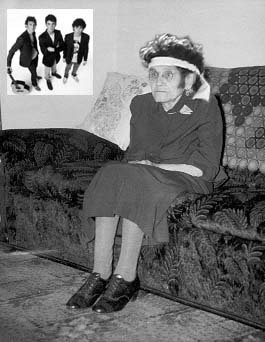 Jonas Brothers fever is raging hot, as we've been waiting for the new CD. Tomorrow is the release, and we'll be there, if I can get Grandma to the car. Or, I might leave her home and dash out and get it myself, which would no doubt be a lot easier. I just hope she doesn't stroke out, since the Lifeline battery's dead and I'm too cheap to buy a new one. Cuts into my discretionary spending, you know.

Really, this isn't like back in the day of The Beatles, when Grandma had all the extra egg money to spend on records. The chickens all died, or, as we like to say, went to roost in Heaven. So if we have to decide between frivolous lifesaving devices and music, it's not even close.

But her concern today won't be the dangers of cardiac arrest and vainly pushing an equally dead Lifeline button. It'll be rocking out to the new Jonas Brothers' album, "A Little Bit Longer."

I can hear her now, "Make sure it doesn't have a broken case!", which is also one of my pet peeves when it comes to CDs. If I have to fight and claw a mob of girls to get one, of course I'll have to take what I get. But if it's a clear shot to the whole rack, I'll make sure the case is OK. Then we'll have it, we'll listen to it, and if she dies, she'll at least die happy.

Kevin, Joe, and Nick, they really are quite cool, aren't they?! 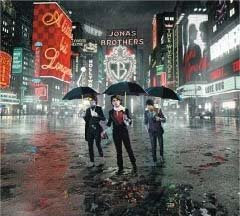 "Just gotta B B good to me, I'm burnin' up for you, baby, I'm not about to be another victim of a video girl."

It'll be hard for us to sleep tonight, that's for sure, with visions of rock 'n' roll dancing in our heads!

The album got a great review at AllMusic.com and in Rolling Stone. It sounds like they did a really great job with this one, and the 30 second excerpts at Amazon sound like it too!

Except we don't know when to start counting down the hours. Like 10 - 9 - 8 - 7 ... Because it's not like we can rush out and get it at midnight. It'll truly be more around 11 a.m., because those old people in the CD department at Walmart are never in a hurry to get the new stuff out... Alas.

They're never very helpful either, to tell you the truth. They've got the boxes of new stuff setting around and if you ask them if they got such-and-such CD, they'll get out their computer lists, scratch their heads, and go, "I don't know, I never heard of that one, uhhh..." They had a retirement party for one old guy who worked back in the CD/electronic department. I bet I asked that guy five questions over the years about merchandise and he was completely clueless. I would've asked him more questions, but by then I knew better.

Anyway, I don't want to spoil our enthusiasm. The fact that these folks can never do anything right is nothing to get myself worked up over, because I already know the Lifeline's dead. So we'll start the countdown. 10 - 9 - 8 - 7 ... That's quite a title, huh? "A Little Bit Longer." It's been long enough! Lord, get us through this night!
Posted by dbkundalini at 9:27 PM