China -- A Nation of Fools 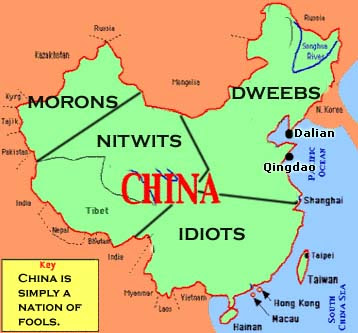 We have been less than impressed with China during the Olympics, to say the least. It has led us to one unmistakable, certain conclusion, that China is simply a nation of fools.

Obviously they have what it takes to get things done, if you don't mind being an automaton subservient to a slave-driving government.

The scandals in the Olympics have given them a black eye, for sure. Some of it was done for simple theatrics, some was out and out cheating. They're definitely control freaks. 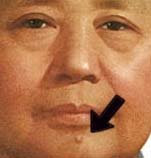 Maybe China "had it goin' on" at various times in their history. Like when they discovered Chinese food. But it's all been downhill ever since.

They have a nitwit leader named Mao. As far as we can tell he does little but pose for pictures -- and not 8 x 10's either, more like humongous posters the size of a double decker bus. By the way, look at that disgusting, honking wart on his chin!

We hope it's a good long while before we have to hear about China or think about China again. We have a request submitted to the Olympics committee that if China ever makes an application to host the Olympics again that they "conveniently" lose the paperwork.

The Chinese have many sins to answer for, not the least of which is the terrible pollution in their cities. And of course their Communist government sucks royally. 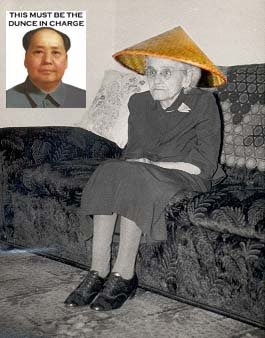 Let us bid a final farewell to the Chinese. Don't call, don't write, don't drop by. If you ever dig a hole in your yard don't come this far. We think you are terrible -- a veritable nation of fools -- you disgust us -- we never want to hear about you again -- you should be ashamed -- you're liars and cheaters -- your people are idiots for submitting to your Communist government -- Mao is a certifiable twit -- your fireworks are very dangerous to children -- your food has intolerable levels of MSG -- you're chronic sufferers of the China syndrome -- a bull in a China shop would be doing us all a favor -- your restaurants are cheapskates in that you can't take home food that you paid for -- Confucius was a fluke; it just so happened that one guy in your whole stinking land managed to have all his chromosomes.

In all seriousness, I am one man, just one man. My life has been pretty good but to tell the truth I've always been kind of at loose ends, drifting, without much real purpose. But all that comes to an end, starting now. From now on, I -- this one man -- bravely, courageously, and triumphantly will lead a quest, a charge, to expose, defeat, and ultimately destroy the nation of China!
Posted by dbkundalini at 10:13 PM