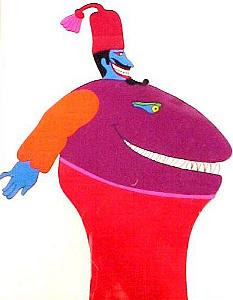 Except there's no place to get a sacred sword. No one sells sacred swords, except probably in some metro specialty shop, or online. And I just don't feel like I want a sacred sword coming to me without feeling it. It might be too unwieldy or not have the right vibe. I don't want a scimitar, or anything Turkish looking. I don't want one of those blades that flares out like a pirate's sword. Or any kind of hilt that's thicker than a loaf of bread. I'm feeling very particular, but not so specifically particular that I could fill out an order form and make it right.

What I need is a store with a vast array of swords, something I can eyeball and handle. Take it off the wall and maybe cut off a few heads. Or flip a few heads of lettuce up in the air and bring them down a salad. Stand back because I might do some damage.

Speaking of Turkish, I might be put off at the sacred sword store if the guy had a big bushy beard and those huge eyebrows and is fat. I was watching Yellow Submarine a couple weeks ago and that Turkish look isn't my favorite. I'm not prejudiced but I have my limits.

Now, in the absence of having a sacred sword to twirl and poke about in a ritualistic way, I wonder what to do. My solution so far is to get a steak knife and make thrusts in the air with it. I'm checking out the handle. It's a regular steak knife so it doesn't seem sacred, and, honestly, it isn't. But it does have a blade, a sharp blade, and it comes to a point. So it'll have to do until the real thing comes along.
Posted by dbkundalini at 6:52 PM