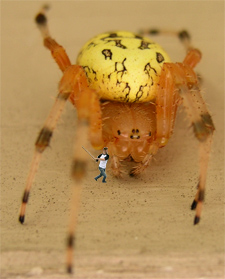 Sometimes it pays to be the little guy, small, wiry, able to adapt more quickly, and able to undercut the other guy up there lumbering around. Swinging at his kneecaps or mandibles. I had that in my post, "Industrial David Slays Industrial Goliath." And something like it in yesterday's imaginary scenes, "Hail The Conquering Industrialist."

So it's a little thing, but it's popped up a few times, physically portraying what is also a psychological theme, that it's not always good to be big, sometimes you have to be little; there needs to be a balance. You get a big head, become nothing but head, and someone who's better balanced comes along and cuts you to pieces. In the psychological realm, you blow up so big, you pop. The lesson: Don't quit while you're a head.

You've noticed this with some of the bigger companies. They'll have their major product, then they'll also have lots of cutesy littler products. It's not just cola; it's also grape, orange, etc. It's not just ordinary cards; it's also the littler department, and even littler subdivisions. You might say that's just creative expansion, not having all your eggs in one basket, appealing to other markets. True. Or it could be they know you've got to have a mix of big and little. If you're too big, your customers want you to fall. If you have a bunch of smaller entities, it takes the pressure off the big guy. A sore thumb still has the rest of the hand.

That's also one of the reasons you have to be humble in religion. "Such a worm as I" and "a wretch like me." One, your standing is before the divine, who is a jealous god. Two, if you're not humble, you're not going to see the ongoing expansion. And you do want to see something. But any abiding in the expansion without quick and frequent trips back to humility guarantees a hard fall. See Milton, or any televangelist story that makes the news. You can get big, but you'll blow up. Even the divine got too big for its britches, since there was nothing around, and that's why we had creation. The flood story is about getting little again, but without the lesson actually being learned.

You can see how this affects the Residential Industrial Movement (RIM) in its struggle against the Major Industrial Powers (MIP). Which one has the more naturally littler elements? Clearly the RIM, as the power (so far) is dispersed among many companies, backyard factories. The MIP have to really work at this, but of course they know it, which is one of the reasons it's so hard to bring the SOBs down. Which leads me to an idea: Maybe we ought to be praising the MIP to high heaven instead of tearing them down all the time! Our tearing them down might actually be helping them! We'll have to think about that one!

In my imaginary scenario yesterday, I was able to stride across the world, receiving the acclaim that did the biblical Herod in and consumed him with worms. How was I able to do that? By becoming extremely small and working willingly with that. If I may polish my knuckle and brag on myself for a second -- but just once! -- that's how I live. Down among the dust bunnies, the used cotton swabs that missed the waste can, and spider webs in the corner. I might spend the morning cold and naked, curled up in the drain on the basement floor. And hope no one sees me, so I can get the maximum value out of it.

Kids do it all the time. If you start out little, it's easy to be little. They're playing with their little soldiers, imagining themselves killing one another. It's very cute, but look what psychic good it does them! Not realizing any of this, they center their thoughts and imaginations in the very large and the very small, and their little guy gets killed once in a while. Then they count to three and he's alive again. So they do all right. But we adults ... for us everything starts out actual size ... so we suffer.

My real concern, of course, is how all this pertains to industrialism. And I sketched out some of the meaning for industrialism above. We want to become big, really big, big enough to knock off the MIP once and for all. But one of the ways we'll do this is to remain very very small, so small we're an insidious presence in the world, not just a lumbering giant. Remember that phrase, the bigger they are, the harder they fall. And I'm thinking of the Cyclops, that old story. He's got one big eye, meaning it would've been better if he would've had two smaller ones.

It's great to be big. It's also great to be small, to balance things out. Because this phenomenon of the psychic price is real. You're going to pay it in full, bit by bit or all at once. If you're paying it down as you go along -- and it's better if you're not 100% conscious of it -- there will be equilibrium. If you defer the payments forever, guess what, it'll be so huge it'll wipe you out.

So, I may be a colossus striding from one victory to another. But I'm also ant-sized, tangling with dust bunnies and making a tent out of tissue paper and popsicle sticks. How low can you go?

Believe it or not, I took the picture of the spider yesterday. Isn't he cool? The little guy taking a whack at it, meant to represent me, even though it's not me, was pasted in. Needs a shadow.

I was at a nearby park -- trying to clear my head, and scout locations for new factories, if I can convince the legislature to turn over public lands to industry -- and I happened to see this spider crawling up a web. It got to the top and just sat there, so I got my camera and took several pictures of it.

I don't see too many examples of this guy on the internet, but the ones I see lead me to believe it must be a marble orbed spider. The yellow skateboarding helmet appears to be its most distinctive feature.

Anyway, that's a slice of life, the life of nature as it exists in the wild. Which we're currently stuck with.
Posted by dbkundalini at 4:34 AM