A WEEK ON THE TEACHINGS OF SRI MASTURBANANDA (1) 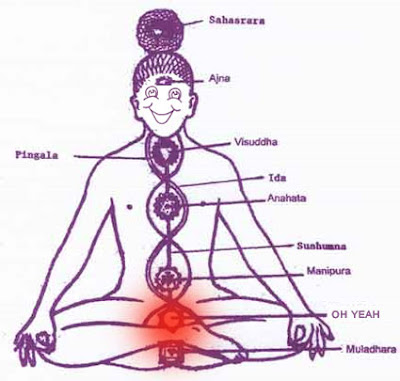 The word "Sri" is a title, kind of like "Rev." or "Your Holiness." It is usually attributed to Indian swamis as a sign of respect and recognition of their spiritual attainments. It is not -- we repeat, it is not -- a misspelling of "Sir." "Ananda" as part of a saint's name means the bliss of.

Different masters and different schools of thought teach different things, of course. Many practice a strict asceticism, in matters of diet, being married, etc. Others are more lenient. Plus, each of the masters seems to have things to say about sex, and in this area they nearly all have very strict opinions. For some, quite naturally, what they preach isn't what they always practice, although there are those who are sincere, strict, chaste, or what have you. At least they haven't been caught yet.

But it seems that strictness isn't the way for everyone, as one notable master believes, His Holiness Swami Sri Masturbananda, known by other appellations, such as "The Smiling Saint," "The Secluded Saint," "The Saintly Stallion," and, a playful title, "Old Shoot The Moon." When I first met him, he addressed me with such kindness and contentment, and I'll never forget the first beautiful words I heard him utter, "Please let me wash up before I shake your hand." When visiting his ashram, I was pleased that each of the chelas (students), like the master himself, had their own private bathrooms.

Sri Masturbananda offers his chelas glimpses of enlightenment. He teaches that there is a full and direct experience of divine consciousness without ending, true enough, but he is very realistic in this sense: You're not likely to get there anytime soon. In general, the best you're going to do is to experience quick glimpses of divine awareness and ecstasy. What he teaches is that the approach toward those glimpses is half the fun, then the glimpses themselves are the other half, and cleaning up is the rest.

I've only seen The Smiling Saint frown one time, and that's when I asked to be able to behold him in his full glory. This he said is strictly forbidden, as "No man may look upon me in my heat and live." But he relented to this extent, allowing me to sit just outside the door as he practiced his meditations. I was left to my imagination, but I wasn't disappointed...

The whole thing sounded very typical at one level, yet everything was accentuated to a much greater degree. For one, it sounded like the pages of a magazine were caught in an industrial-strength fan, fluttering with speed and violence. Second, the swami's breathing was extremely intense, like the sound of a blast furnace door being opened and closed very rapidly. And finally, at the point of greatest consciousness, when he was most directly in touch with the divine, I heard such a fierce heaving of breath, then a moment of absolute silence. It was like time itself had stopped, then there was an ascending whoosh of excited breath, and, lastly, a splat that sounded like a giant paintball hitting a brick wall.

I sat there, myself breathless, stunned, and after a very intense quarter of an hour, I heard a calm running of tap water from his room, and the saint stepped out to greet me, appearing very drowsy but with his trademark smile quite intact.

I didn't know what to say, since it was clear that I was in the presence of greatness. He extended his right hand, still very hot, and gave me a welcome blessing. I managed a stuttered prayer: "P-please ac-accept me as yo-your student, Master." And so it was.

This was all a number of years ago, but to this day I hear things about him at his home in Mother India. I hear that the years have slowed him down to a great extent. Now he walks more with a shuffle and apparent pain, but there's one thing that the years have not dimmed, hallelujah! He's still a stallion where it counts!

The essence of Sri Masturbananda's teaching remains so true: If you recognize this is the best you're likely to do, the closest you're likely to come to divine consciousness in this incarnation, then go for it. Don't be like the frowners, the naysayers, the ascetics, always beating the flesh but never in the right place. Find the sweet spot, zero in on the equipment God gave you, and you shall glimpse the divine!
Posted by dbkundalini at 8:26 PM