Blue Skies Ahead For Residential Industrialism 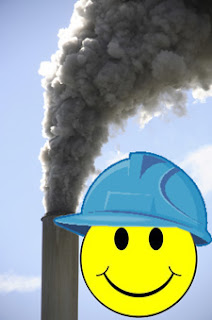 I love the happy songs. They put a lilt in my step and lift in my spirit. Like "Happy Days Are Here Again," the old fashioned song that came after the Depression. Or a little newer, "Happy Together," so happy together. And I think Willie Nelson did a great version of an old chestnut a few years ago, "Blue Skies," nothing but blue skies from now on.

That's how I see it out ahead of us for the Residential Industrial Movement (RIM), nothing but blue skies from now on. With an occasional smokestack, at the most five or six per block. With the blue skies peeking out everywhere, giving that great look of good cheer we all sort of like.

I've been doing a lot of thinking, thanks to the general proclamation that I should be known as "Super Brain." You can't have a name like that, or a brain like that, for that matter, without trying your best to live up to it in the most responsible way. So I'm super busy, doing with my super brain what you might expect, thinking in super ways. Another word for what I'm doing would be "cogitating," or we could say "mulling," "considering," or "ruminating."

And what I've been thinking, cogitating, mulling, considering, and ruminating about is the future of the RIM. To do that, in part, I look back, where we came from. We've been at it seemingly forever, since May of this year, I think, or June. I know I really got into industrial affairs in April, becoming an opponent of the Major Industrial Powers (MIP) at that time. Then a few weeks later, it seems, I proposed the theoretical framework for what became the RIM, which was that If any man can have a factory, every man should be able to.

But not all of us have a big tract of land at the outskirts of town. Therefore our factories must of necessity be right where we live, in the residential districts of our towns. Hence, the Residential Industrial Movement was born. And it took off, now to the point that virtually every city in the country has a lot more facilities, in formerly strictly residential areas, given over to industry and mass production.

I was fortunate to get the credit for the idea, fortunate because they say a great idea will have a thousand fathers! But the people in the RIM were good people, recognizing me alone as the philosophical father of residential industrialism. That was earlier than the "Super Brain" designation, which also is a great honor they gave me.

But looking ahead, that's what we're thinking about today. All of us have probably noticed how the MIP has apparently shrunk into the background. We don't hear much out of them these days. The rumors have it that they're trying their best to play catch-up, because our production base is so much broader, and our willingness to produce in quantities substantially higher than demand has shaken up their entire business model. And playing catch-up, that means they're likely on the ropes, dazed, mentally addled, woozy, beside themselves, and possibly at death's door. I'd love to hear they have at least one foot in the grave!

But I'm going to try to keep this positive. If the MIP is on the run, that's great. Because it opens the field, and the future, to us, with there being "no stopping us now!" That's a happy thought ... and that'd make a great audience chant if I were giving this as a speech in a stadium: "No stopping us now! No stopping us now!" I've got a big smile on my face, for our progress ... but, [he admits with a sly grin on his face] for the MIP's many travails!

My concluding advice for the day is to keep up the good work. Keep 'em on the ropes. Invest your profits as much as you can in your factories and increased production. And don't forget to look out once in a while and enjoy the blue skies!
Posted by dbkundalini at 4:34 AM