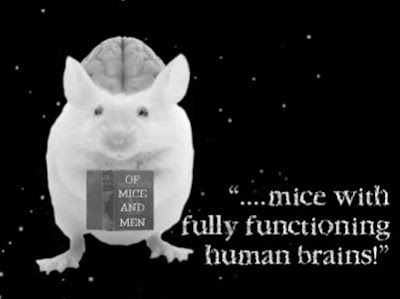 I have to admit this is the first time I've heard of this. But according to this video, it's Christine O'Donnell's claim that she saw mice with fully functioning human brains, and presents the photograph above as evidence.

So what do you think? Is she on to something or is she simply on something?

She says the science is actually there, that scientists have come up with these creatures, regular mice in no way distinguishable from other mice except for an exposed human brain protruding out of the top of their heads! Which, I guess when you think of it, is a pretty big distinction.

The one she got the photo of, if you look closer, is holding a book. Whether he's reading it or not, we can't say, but that's the clear implication.

I don't know what to make of this. There needs to be some limits. Can we afford to allow her a position of power, knowing she's set to unleash these little creatures on our country? In my opinion, that would simply be irresponsible.
Posted by dbkundalini at 2:18 PM