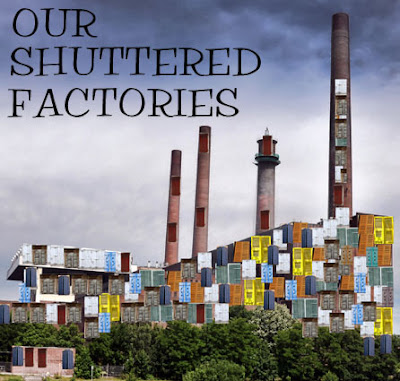 Yesterday, I described the coming of the military into the area, along with thousands of backyard militias, setting up to do the bidding of the Major Industrial Powers (MIP) against the Residential Industrial Movement (RIM). It's probably needless to say, but the vast array of firepower and soldiers standing against us has put a damper on production. Most of our employees, of course, have been scared feceless and have headed for the hills, along with quite a number of residential industrialists.

But I'm still here. A good night's sleep and I'm up, feeling a lot more confident than I was yesterday. I can't say I'm exactly thankful for what's going on; that'd be too strong a word. But it is in those times when push comes to shove that you find out what you're really made of. At first, I thought I was made of mush. But now I'm getting some of my confidence and resolve back. I've been working with some of my sacred swords, my Chinese metal balls, my own smokin' hot interpretations of scripture, and some of Pastor Wadd's sermon notes, and things are much better. Spiritual stuff.

Sacred sword play is a very intense discipline. It's like Tai Chi with props. I've gone into many an other-worldly trance bringing my consciousness to the point in those slow-moving sessions. In case you don't know much about this, there's some joining in consciousness that the sword wielder sees between the sword and his body. The point corresponding to the head and beyond, with the pinpoint accuracy and vanishing point, to say the least is a great confidence builder. I wouldn't trade my swords for all the nuclear bombs in Iran!

The Chinese metal balls have curative powers. One time I got rid of arthritis in my toes simply by sleeping with them in my socks. After a few days, the pain was gone. The worst part, of course, is having to get up in the middle of the night and tripping all the way to the bathroom. Then there's the scriptures, the condensed wisdom of the residential industrialists of the past (Israel) facing the major industrial powers (the Babylonians, Romans, etc.) And finally, there's Pastor Wadd's notes. He's a local guy who specializes in combating sexual addictions. I get quite a bit of good out of reading his wise comments, especially in that afterglow phase when the danger's well past.

You can tell I'm very mellowed out -- much more so than you'd think for someone facing industrial extinction either later today or tomorrow. When they shut down my factory, it'll just give me more time for other things ... and eventually I'll overpower them in some other way...

But I imagine there's going to be something more to it, with the military and militias. Can I just live happily ever after? Yesterday the MIP flooded the zone -- that's my word for it -- by fanning out across the country with thousands of sheriffs issuing zoning violation tickets and process servers bringing notices of legal actions for patent violations, etc. They've no doubt put a lot of work into this, buying off the feds, the state governments, the counties, and right down to the local city councils.

So they're looking to minimize death and damage, probably, but with all these militias -- most of whom are crazy, supporters of Republicans so you know they're dingy -- there's sure to be some violence. One, they want to make a good example of someone, a sufficient number, so we won't ever do this again. I wouldn't be surprised if most of the fighting took place right here locally, since this is where residential industrialism got its start. A local guy, they say, was the philosophical father of the whole movement.

Along with the paperwork being passed out, summonses to appear in court and all the rest, they were already acting against some of the backyard factories, those that were abandoned in the last few days. I went out for a drive last night and saw quite a few shuttered plants. I took a picture of the Spooner vat factory, since it's right up the street. It looks very sad. It was just in July that we helped with Ted's first vat. Those were the good times, in approximately the Silver Age of Residential Industrialism.

I'll see what today brings. At this point, something's definitely got to give. But I'm going to try to keep the faith, keep my single pointedness going, and the other great benefits. I might see the help of a higher power yet! Other than that, I could watch a little TV -- I might get out my Iron King DVDs, since he also faced a lot of crazy stuff in his life and everything always seemed to work out OK for him. Then, who knows? Maybe I'll put on Grandma's old silk kimono and lounge around the house. Have a drink and check out a few magazines or videos. And then read through Pastor Wadd's notes again.
Posted by dbkundalini at 4:34 AM