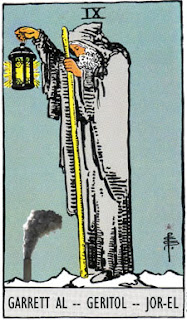 This, I can't believe. It's too far out there. Not with how good things have been going. It doesn't gibe. Common sense says no. This takes the wind out of me.

Can't anything go right? Where's this guy get off? Did he have to show up? Of all people, now supposedly with a prophetic perspective on things? All doom and gloom, like anyone wants to hear that. I don't want to hear that. All these things, I was thinking.

We were at the school. Some of the neighbor companies rented the gym for a nice ceremony, so they could present me my "Super Brain" plaque and bouquet of roses. What's his face -- Ted Spooner -- was giving a talk and I was looking at my watch, thinking of lost production time. When this guy shows up -- Garrett Al -- and the conclave parts like the Red Sea to let him through.

He was accompanied by some neighbor kids who set off a half dozen firecrackers, and that got our attention; the acoustics in the gym are brutal. I looked down from the stage and saw what looked like a prophetic figure in a robe, like a Halloween costume but way too real. He had the robe (check), the beard (check), right down to the bony pointing finger, meaning there was something unworldly about him. The others didn't know him, but even in the mysterious garb, I still recognized my old nemesis, Garrett Al (also known as Geritol.) (Most of you will remember him as the guy who showed up and allegedly tried to force himself on me for sexual favors during my long hiatus. When we were friends, I gave him the nickname Geritol as a play on his actual name.)

"I am Jor-el," he announced loudly, his bony, quivering finger still pointing at me. I immediately thought of the name, Superman's dad on Krypton, and not a half bad progression from Garrett Al to Geritol to Jor-el!

"Speak your piece, Garrett!" I commanded, "Then get out!" At that point, I still had three tires back home I wanted to finish before watching "Baggage" and going to bed.

Garrett, or Jor-el, to be respectful, told the assembled group, local representatives of the Residential Industrial Movement (RIM), of fearful things, including the massing of armies and authorities against us, and the coming swift and final victory of the Major Industrial Powers (MIP). As he spoke, somehow there was a sign obvious to everyone -- possibly left over from the firecrackers -- the smell of sulfur, that gave Jor-el's words credence.

His words -- delivered with a lot of tremelo in his voice and a stare, almost like you'd see in a blind guy -- cut us to the quick. He claimed to foresee foundations falling, death and despair, children orphaned, fires raging, and a modest increase in prices for consumer goods. It was strictly "Four Horsemen" stuff, presented with a lot of gusto. Garrett's a natural orator, speaking without notes the entire time.

Maybe you can tell, I was wavering between belief and disbelief. His whole style was one that demanded belief, yet, remember, I'm Super Brain -- if any of this was true, wouldn't I know it? Who, after all, is Garrett Al? He lives out near the scrap metal mountains on the north side of town. Where he would spend his day ... seeing the sun constantly reflected ... off pieces of metal haphazardly arranged ... hmm, possibly an actual way to stimulate a mystical experience ... and tap into omniscience ...

I wanted to disbelieve, and still I'm not sure. I remember Garrett Al as that pervert in my yard, and the police hauling his sorry butt away. I wanted to ridicule him so badly. I wanted to tear him down, then bring the ceremony back to its senses. What about his name? The syllables are nuts. Gar-ret-Al, like Uni, Roy, and Al. You've got AL, OL, and EL, almost like AL-CO-HOL -- is he drunk? But, d--- it to h---! There is indeed a strange, cryptic progression from Garrett Al to Geritol to Jor-el, the very guy who prophetically warned Krypton of impending doom. And haven't I always reviled the elders of Krypton for failing to see the mountains erupting right through the very windows of their council room?!

But what about the others of our RIM assembly? They were trying to shout him down, just like the elders of Krypton, "He's mad! A madman!" Something about it pierced me through. I started to shiver as I saw the others guffawing and backslapping, their big gaping maws replacing normal human mouths, their bad teeth looking like big horse teeth, and the terrible bad breath you could taste from here. They were waving their arms and making threatening gestures toward him. Someone might've pulled a folding chair at any minute! Garrett was in danger of his life! But he was standing there like the suffering servant, or a dumbwaiter.

I called out to the crowd, holding up my Super Brain plaque, now worthless in my eyes, and finally got them quieted down. Among my consoling remarks, I said, "Gentlemen, gentlemen! In view of Jor-el's words, I suggest that we all retreat to our several hearths and family altars, holding close our children and womenfolk and comforting them, and crying out for mercy to whatever god it is you worship, hopefully including widely among our number the one true and living God."
Posted by dbkundalini at 4:34 AM