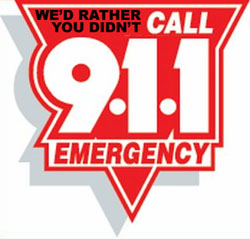 You'd think if anything in our society were efficient and helpful, it'd have to be the 911 service. Their short little phone number's been drilled into everyone's heads as the go-to number for any emergency. We know it by heart and trust it'll be there when we need it ... even kids in daycare learn it.

You see the quickness of firetrucks, ambulances, and police cars when they go racing by, and you think, That's efficiency! But what if half their speed is only to make up for lost time thanks to a secretly inefficient, bloated 911 bureau, where the operators are trained to be skeptical and therefore slow to respond?

It's just a thought I have, mind you. It's not that I have any personal experience with these wankers. Although, now that I think of it, I remember one time trying to call 911 when there were big sparks flying out of my furnace; it's not that they were slow to respond that time, in fact there was no answer at all. My imagination says that if I actually got them that time, they would've been very skeptical, like, "We've never heard of that before, sir, and we're not sure that's physically possible. Did you know you can be charged for making crank calls?"

The way I picture it, the bureau only hires skeptical people, then they're trained to hone that natural skepticism, so the guy calling in has to prove he really needs help. Because, look, it costs a lot of money to send out the ambulance, firetruck, and police; if they could whittle away 25% of the calls, that'd be a pretty big savings. Who's really going to know? Because our assumption is they're actually responding to 100% of the calls.

So they're skeptical. But what are they looking for, or listening for, when you're on the phone? How frantic you are, whether you're a natural born actor or not. They're going to put you through their paces. I said it costs a lot of money, and that's true, and just think how many pranks -- boy crying wolf -- they've had over the years. We've all heard of people calling 911 because they were stuck in traffic, or their house was on fire but it was only a porch or something.

If you have a medical emergency, it makes a lot more sense, from their point of view, that you would try to help yourself. If you're bleeding to death, it only makes sense to ask, "Couldn't you use your cigarette lighter to cauterize the wound?" You're screaming something and they can't make it out, so they go to the trusted, "Sir, you're going to have to stay calm." Then the phone suddenly goes dead ... and you do too.

If you've ever toured the 911 facility, you'll remember the chart they have, keeping track of how many times each operator has been fooled by callers. It's a competition to keep the number low, like golf, so naturally they're going to question every little thing. Then if someone actually dies, it's no big deal to edit the MP3 of the call or overlay some line static as a good excuse. And everyone knows technology fails most of the time, so if the whole file goes missing, it could've happened to anyone.

Questioning pays off, because really most calls aren't legitimate. The cat wasn't really lost and turns up, or eventually gets out of the tree by itself. But like I said, the 911 bosses are looking for skepticism way back, even in the interviewing process. If you don't show a lot of skepticism, you're out. And it's tricky stuff, too. "You got the job, Smith!" If Smith says, "Yay!" then he doesn't get it. But if they have to convince him, "No, really! C'mon, Smith, you got it. Look, man, I swear on my mother's grave, my son's life, and my enviable manhood that you have got the job," that cinches it. We've now got an impenetrable 911 operator!

The rest of us might suffer, but so be it. An entire city block might burn down, but if 911 eventually gets the fire department notified and they're able to save one shed, they congratulate the guy for a job well done.
Posted by dbkundalini at 5:50 PM