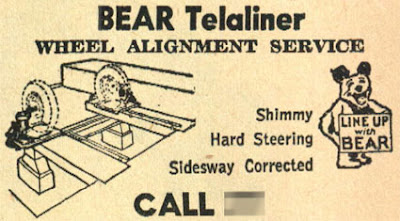 I was looking at some old phone books, just out of my normal archival interests, and was enchanted by the old printers cuts in the yellow pages.

This one with the bear is one I remember clearly from when I was a kid. I grew up around printing presses, type cases, and printers cuts, and this little bear was a common one. At my place, though, it was a tricky business to get a new cut if you needed one, because we couldn't make them ourselves. They had to be ordered. So it's still refreshing to me to be able to make a scan and JPG and see it instantly! Like the Polaroid of printing...

The bear -- and this part I had forgotten, if I ever knew it -- had to do with car alignments. You'll notice I fuzzed out the two-digit phone number, so none of you will call this particular garage looking for service. 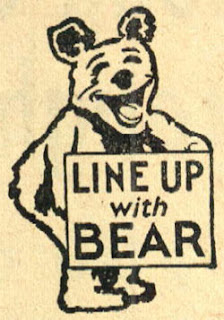 Here's a bigger cut. It came in any size you wanted, of course, as long as you bought it. Since the printing business I was involved in was very small (shoestring), we didn't always have various sizes of anything. But the phone company could afford to do whatever they wanted, so they had at least two of this one!

A few months ago ... this was weird ... I don't have any printers cuts anymore ... but somehow there must have been one in amongst some of my junk, which then, by the weirdest coincidence, somehow ended up in the driveway. This was right at the time that I had a washing machine for sale. The guy who came to buy it looked down and saw the cut in the driveway. He picked it up and asked me if I knew what that was. Do I know what it is? LOL, but how it got there, I have no idea. Coincidental osmosis, must have been.

The coincidence goes on, in that the guy himself had a printing business years ago, and knew all about the various letterpresses, type cases, pica poles, slugs, Ludlows, and cuts. Out of all the people in the world to show up in your driveway -- and to have a printers cut make a rare appearance in the driveway at the same time -- had to be an old printer. There's some very weird things that still happen.

We had a nice conversation about that. Then his friend with the truck showed up, he got the washer and was gone. I tossed the little cut in the garbage. I have no use for it.

It was great to open the old phone book (1954) and see the little bear, and a bigger version as well.

Note: Here's a nice article on the bear graphic.
Posted by dbkundalini at 1:13 PM