The Almanac Of Eating Time Averages 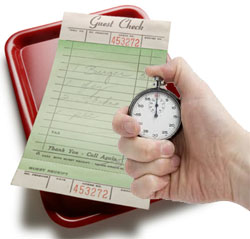 I'm standing outside a popular eatery, so popular that everyone wants to eat here. What ever happened to the recession? If everyone can afford to be eating out, can it really be that bad? No one's pinching pennies, everyone's out for a twenty dollar meal.

You get a gigantic crowd and more pressing at the door, it's hard to enjoy your meal. Hold 'em back! I need to binge it down my throat and immediately purge myself from the premises. Lead the cow to its stall. Next! The pony needs his oats. And I'm no one special. The waitresses see me as another random mouth, not a diner. They're going to park my butt somewhere, probably a greased chair, all the better to get me out.

Somewhere in the back, or upstairs, a big brain is watching over the facility and making calculations, like the darkened banker on "Deal or No Deal." Does this guy have girth and plenty of it, or is he a beanpole? How long will it take him to eat? Let's move the big boy to a smaller table, make him less comfortable, maybe he'll get the hint we don't want him lingering till he gets his fill, if ever.

He looks it up in the book, "The Almanac of Eating Time Averages," the PDR of busy restaurants. Most of it you could work out in your head, just out of experience, but money's made at the margins, where precision matters.

If it weren't his concern -- or even when it is -- the rest of the crowd has some obvious consciousness of these matters. They're not looking at their watches just to check the time, but to work out their own calculations and compare them to some innate knowledge of eating time averages.

I too do it, but with compassion. To be fair, most people at the door are resigned to the fact that they should've gotten there earlier ... or later. But still they wait. Whatever it takes depending on the time they have to waste. When I'm at the door, I know I'll eventually make it, especially if it's just me and the Pink Professor; a party of two has the edge over a party of seven.

Of course it depends on how busy it is, and how unruly people can get. Anything could set them off. I can understand the typical crowd, but what if they became a nameless, faceless mob. Then, with lessened restraints, anything could happen. Like an Ox-Bow Incident mob, worse if they had Republican insensibilities. That'd be a different animal. I'd hate to look over and see their unpredictable expressions.

Then what if the crowd became so brazen that they were out checking parking meters and calculating how long other folks were in there. Or checking video checkpoints we'd passed, getting information. They might string everyone up, then put in their order.

Fortunately, I have some data of my own, a work in progress, let's call it "The Almanac of People's Natural Breaking Points," so I'm not at everyone's mercy, but I too have experience....

(We just got our table.)

OK, now that we're in and seated, we will enjoy our meal. An enjoyment that someone somewhere is quantifying even as we speak.
Posted by dbkundalini at 1:21 PM