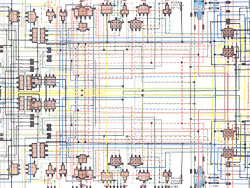 Sometimes I think I'm hardwired to barely function, then I find that I function fairly well. As it turns out, just because I'm my own worst critic doesn't mean my criticism is always true.

There are plenty of people who are hardwired to barely function, and in those moments when I know I'm not, I feel sorry for them. But they serve a good function even in their dysfunction, being the reminder for the rest of us that, "There but for the grace of God go I."

If you happened to get the short end of the stick on the wiring, at least you're fit enough to read this. Whether you'll ever be the same afterward, that's your responsibility.

I'm just thinking over how some people are hardwired. Routine is one key element in a lot of hardwiring. If your routine is to get up every morning and have coffee, it's hard to do without it. There's an ad on TV about a guy (looks like he's hardwired to be a go-getter) who's almost late for work, so he hasn't got time to make coffee. But he drinks an energy drink (5-Hour) and he's good to go. I'm hardwired to avoid all weird drinks like 5-Hour Energy. I've never had one and don't expect to. To me it sounds like you're agreeing to something later for something now, like a bargain with the Devil.

Not everyone's hardwired to look ahead to consequences. But that's one of my biggies. I'm hardwired to look way ahead to the consequences of my actions. It's an offshoot of paranoia. I'm on the lookout for everything. If you've ever watched birds always on the lookout for predators, that's me. A rabbit poking his head out of the hole. But as far as I'm concerned, that's good, it's nature's way. It's given me a certain amount of willpower, to keep thinking of the worst that could happen if I gave in. So far it's kept me out of prison and a million and one scrapes. But I look at the local news -- there's always another murder or drug bust -- and I see not everyone's hardwired the same.

Sounds good, but wait... There's a downside to too much looking ahead to consequences. It means you tend to avoid risks. So I'm going to have a hard time making a million dollars at this rate. Because I'm not out there doing things that have the potential for a big payoff. I've got a certain level of equilibrium and I'm hanging on to it, not increasing, not decreasing. Although, actually, if you're not increasing, you are decreasing to some extent. I could be going for a little more gusto, that's reasonable. But I've got my way ... and at this point I'll probably stick to it.

There's lots of other things about hardwiring. Your goals, being task-oriented, perseverance, ways of thinking (magically, rationally, scientifically, religiously, etc.). I guess it's a more boring subject than I thought at first. Personally, I like to get things done. Slog away at it till you've done a reasonable job, then move on to the next thing.

I know, I know, big hairy deal.
Posted by dbkundalini at 6:33 PM