Your Place At The Kennedy Assassination 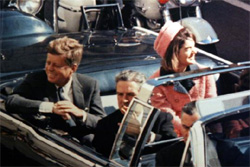 As more and more kids of my generation become senile and forget it all, I suppose I should address the assassination of President Kennedy. We just had the last World War I veteran die, and, for all I know, I might eventually be the last one to actually remember the events in Dallas in 1963.

When I say I will address the assassination of JFK, of course you'll excuse me if I say I'm not going to address everything about it. The scope of that would be so massive, for one, and, two, it's already been done in an encyclopedic way that would far surpass anything I might say by way of ignorant, secondhand conjecture. Not to downplay the veracity of my own opinions. Plus, I simply haven't got the time to do it, since I too am feeling more senile everyday.

So please excuse me if, in the course of this present post, I confine myself to a more narrow purpose, to document the supposed feelings of a few of the folks along the motorcade route. To accomplish this task, first, I will give my own thoughts about standing on parade routes; then, second, I will express some of the supposed thoughts of the people on the motorcade route that day in 1963. The two, my parade thoughts and my thoughts about their thoughts are two separate things, but obviously both will come out of my own head.

First, what I'm thinking when I'm on a parade route. Thanks to the assassination of JFK, oftentimes when I'm on a parade route, I'll think about it. I'll think, If there's trouble, will I be a reliable witness as to what happened?, as I wish I would have been had I been on the scene at Dealey Plaza in 1963. I wonder, depending on the dignitaries present in the parade, if I would leap into action if there were an assassination attempt. In 1963, of course it all happened so quickly, and most people were caught off guard, and anyway, it was the Secret Service's job to protect JFK. But I was at a parade in which former Beatle Pete Best passed by, and someone might've dashed the car, a diehard Ringo lover. For about 20 seconds, I was ready for anything. Lastly, when I'm at a parade and I don't have a video camera, I figure I won't be the Zapruder of the day. I glance over and see another guy with a camera and figure that's our Zapruder.

Notice how concerned I am about possible assassination attempts, all thanks to what happened to JFK. And what happened to his brother and MLK didn't help. I think the key thing in my favor -- and I'm proud of this -- is that, more or less, I can well imagine that I'd be fearless in facing whatever. I like to think I would be. Only, you don't want to leap in if there's no genuine attempt and end up looking like a fool or in jail. Like if an antique car backfires, and I immediately assume it's an attempt on Pete Best's life, I rush the car and push him into the backseat, thereby breaking his hands. Him being a drummer, that'd be disastrous.

But I've been at political events where there's been some genuinely prominent politicians, including, now that I think of it, Barack Obama before he was president. The Secret Service was out in force and told a guy next to me to keep his hands out of his pockets. It honestly could've been that I might've had to have tackled that guy. Again, I would want to have probable cause to do so, or I'd be the one who went to jail. "But he had a gun!" ... "It wasn't a gun, it was sunglasses."

And there have been others who went by me and were able to leave the building or outdoors venue, thanks to my vigilance and willingness to lay my life on the line. And I haven't even mentioned my various time travel fantasies over the years in which I'm able to change history. It bugs me to realize that even if I could travel through time, of course the folks on the scene wouldn't believe me that I was from the future, and it all would've happened anyway. That's only partially true, though. For instance, JFK's security forces never would've believed me, true, because I was just a random kid from the future, but if I could've made my way to the Texas School Book Depository, Oswald didn't have any security, and I would've stormed the sixth floor. I'd love to be the guy to go back in history and kill Oswald. The problem with that would be justifying it to the authorities at the time, since he hadn't done anything yet, except take a couple shots at General Walker, who I wouldn't know from Adam. Let's say I did kill him, then I get back to the present day and everything's changed. Since no one else would know the difference, it'd be no big deal.

My second purpose today is to think of the thoughts of the folks on the actual motorcade route. Whoever was a block away or more would be thinking, "Too bad I was a block away or more. But at least I was there!" Their testimony is worthless, since they were in the wrong place. But those who had the foresight to be right there on the scene -- including Zapruder, although he would've been smarter to have several cameras going simultaneously from various points along the route -- all have a story to tell.

Here's what I imagine they've been thinking over the years: 1) "If only I would've known what was going to happen, I would've done something to prevent it." 2) "It was like a blur, it happened so fast." 3) "I just turned my head for a moment, then--. 4) "I thought it was firecrackers." 5) "It's haunted me all these years, I wish I hadn't even been there, I haven't been able to sleep since." 6) "I was on the front row of history, damn the luck." And so forth. It's a combination of despair and understandable helplessness.

I might back up -- since I thought of a few -- and sketch out some of the thoughts of the folks up-route. 1) "When he passed my station, he was OK." 2) "He wasn't killed on my watch." 3) "I did what I could on my block. All was well." 4) "He was good as new when he left my side." You can see, their thoughts take a different tone, one of heroic participation in the event, as though they had anything to do with where the marksman wasn't. They're a lot more opportunistic, but it's hard to prove they weren't each individually responsible for the president's safe passage thereto, since maybe their vigilance thwarted a second completely unknown assassin.

As for me, I resonate most with Number 5 of the first group, "It's haunted me all these years..." because that's exactly how I feel about it. Nothing in life has haunted me so much, and that includes all the many challenges of puberty. To think Oswald could carry a gun in there that day and do this, it's still too much.
Posted by dbkundalini at 2:33 PM