Enjoy Your Youth -- It's About Over 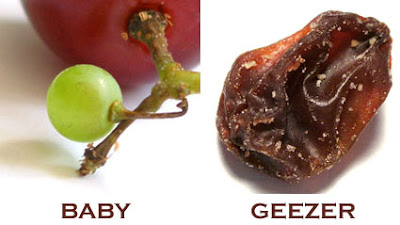 I want to address each of these topics in random order, with an ultimate eye toward making some point yet to be determined. Since there's only two points, and to start with 1 would mean examining them sequentially, and I said I wanted to address them randomly, we'll start with 2. Or reverse order.

The fact that the rest of us are getting older, and I generally think of myself specifically, is most often a topic of concern for us. Because we're not having children, and the concerns of whoopee, conceiving, gestating, and parturition are behind us, if not something we never experienced. But we do experience the aging process.

The aging process is our common experience, and likely always will be as long as time itself passes. And there appears to be no serious effort afoot to slow down or reverse time. We can do a lot of things -- break the sound barrier, dam the ocean, make carp palatable, and even store oxygen in tanks -- but no one, possibly excluding Einstein, has figured out a way to stop time. For one, the powerful clock lobby would never allow it.

The fact is, aging is what happens to all of us. We're sitting in a chair, putting off our times of exercise, and we keep doing that long enough, next thing you know there's cobwebs stretching from the lamp to us, and all the pages of the calendar have long since flown off and lie scattered around the room. There's a terrible stillness in the room -- not even a mouse -- it's the sound of nothing. Just today, I caught myself staring at the wall, and when I finally looked away, it was tomorrow.

You do hear some young people crowing about their youth. "I'm young, you're old," as though they don't get the relativity of the whole thing. There's a baby in the hospital who could legitimately say to them, "You're young? No, you're old." And so on. They're caught in a trap from which there's no escape: You're never absolutely young or absolutely old. It's all comparative. Compared to PJ in The Family Circus, we're all old, and compared to John McCain, we're all young.

But there are babies being born everyday, to the joy of obstetricians, disposable diaper manufacturers, and shoe bronzers. It also seems like a big deal to the parents. Why is a good question, since now they're bogged down for at least the next 18 years, and probably, with some of the snot-nose, irresponsible little brats we see everywhere, till the little hellions are 40 or in prison first. You can pray for death, but with government interference through the immunizations they force on us, they tend to survive.

Our theme here, though, is being old and being young. Kids when they're born are considered very young. And so it goes, they age right along with the rest of us, the process never stopping. The ultimate point is to enjoy your youth while you can, because one of these days you'll be sitting there and you'll suddenly realize all the way to your soul, you're just a corpse waiting to happen.
Posted by dbkundalini at 1:34 PM