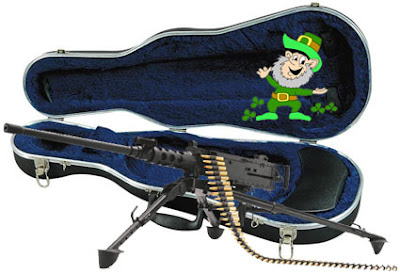 It's been a long day. I've been spending some very anxious hours at the hospital. I must look a fright. I'm looking down at my St. Patrick's Day clothes, a green shirt, a green tie, and a green necklace. There's blood spattered everywhere. I also had a green spangly cardboard/felt hat, lost at some point in the melee. It was probably crushed, trodden underfoot in the stampede to escape, in everyone's mad dash for cover.

To the survivors -- those of us lucky enough to survive -- what happened to our hats and other holiday accoutrements is the least of our worries. We'll just start over next year, getting the things necessary for the holiday a couple days in advance. As for this year, we're more worried about our loved ones, those who were trapped in the crossfire and killed or wounded.

It was a wild, terrible scene, something I never imagined in my worst nightmare. It started out as normal -- the St. Patrick's Day parade. We were there at the curb along the main street, watching the parade just like a thousand other people. Miss Teen America for the Tri-County Region was passing by on the back of an open-top Mustang. I'll never forget it, how she was waving like normal, but a second later it was like she was waving in slow motion, with a horrified look replacing her beautiful smile, and her crown clattering unceremoniously to the pavement when the driver hit the gas.

Everything went crazy, like what might happen in some half-baked fantasy bantered about by guys around a campfire, but this was all too real, something I still can't believe. But it happened. Rival music store gangs, who obviously have had some bad behind-the-scenes history leading up to this day, literally blew everyone away in a horrific shootout, a terrible shootout. I'd rate it a 9 on a scale of 1 to 10, with 10 being the most horrific shootout there's ever been.

And to think we welcome musicians to our parades! That might change! We expect they'll pass by peacefully, blowing their horns, pounding their drums, etc., even working their violins in a beautiful way. We don't expect them to viciously turn on us while taking out their frustrations on one another. But that's the way it happened, their best intentions notwithstanding, the desire only to kill one another. Everything went horribly awry.

I heard the police at the hospital talking about them: The One Note Gang, whose guns went "Tat tat tat tat," like that, constant; The Chords Gang, firing shells that formed patterns of sound with many 7ths thrown in; and The Symphony Gang, issuing staccato flurries of rounds like Beethoven's 5th. What precisely ignited this musical apocalypse, we don't know yet, but obviously there was a sour note somewhere.

I'll never forget the horror of those first dreadful moments, horses scattering, crapping everywhere. Teenage shovelers were hiding behind their blades. Ambulances descended from the hills like bees from their hives, giving everyone emergency shots and asking for our insurance cards.

Since then, here at the hospital, I've been watching their triage measures, probably instituted and practiced in dry runs, but this was the real deal. They were looking for the worst cases and sending them to the beginning of the line. It's demanding work, but with the vast numbers of injured, they had to work fast, cauterizing blood vessels that were pierced by unforgiving bullets. As is typical in such wounds, the entry of the bullets was easy, but they can be very hard to excise.

I mentioned the police. They've been crawling all over the place, crawling in packs, asking questions of anyone who's not in shock. I told them my story, about the beauty queen, and what I could make out of the music gangs, who took their stand and sought to even the score.

I myself -- thank God on high -- was not injured. But I'm at the hospital because a friend of mine was mowed down. A doctor came in and I gave him what information I could, referring to a card in his wallet for his insurance information. These guys are always full of friendly small talk in the hospital, like they're your best friend, but just wait for the bill and the collection agency, and suddenly there's no more Dr. Nice Guy.

These are dispatches from the front lines, I'm sorry if I sound a little spacey. It's not everyday that a holiday is so dramatically ruined. And it's not like having your Christmas tree fall over, even though that would be bad enough. This was a life or death situation for all of us, and to get our thoughts back in order is going to take both counseling, meds, and diligent efforts on all of our parts. I'd rather have a July 4th explosion any day -- anything but another St. Patrick's Day massacre.

Next year I'm going to stay home -- huddling together with friends and family, and thank my lucky charms that I'm still alive. And I'll bet that goes double for my injured friends.

UPDATE: I wanted to mention two other things that I just remembered. 1) There were some frat boys having hospital bed races in the hallway. But the families of the injured went out and asked them to keep it down, in honor of the dead and dying. 2) Five collectable Corvettes were wrecked in the fracas, meaning a busy time for insurance agents tomorrow.
Posted by dbkundalini at 4:43 PM