The Smells I Smell 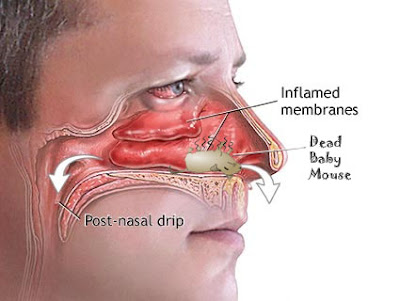 I've written several times about an occasional problem I have. I'll just give two links. My Nose Sniffing Things and Smell Hallucinations. The latter article is best because it quotes some earlier pieces.

To a certain extent, the problem has manifested itself again, but, thankfully, not as bad. Still, it's noticeable enough that I'm thinking about it.

Just to recap how far back this goes at this point, it was September or October of 2008, a long time back! It seems like it wasn't till after the first of the year, apparently March 2009, that I read on the internet that one of the causes of olfactory hallucinations might be brain tumors. So the good news for me is if this is brain tumors, I've done pretty well! Brain tumors are out, my own diagnosis.

In those first months, I was convinced that what I smelled was really there. I was buying peroxide, I was buying Oust air freshener, I was scrubbing under my desk, scrubbing the floors. I poured peroxide all over the hardwood floors and mopped it up. The Oust treatment in my reading room was the worst, because it left a thin film of Oust all over everything, of course including the books. I asked someone else if she smelled all these weird odors and she said she didn't. It was very hard to believe.

The very first manifestation of the problem happened when I was visiting family out of town. I could've sworn that something literally died in my pants. It was crazy. No one was saying anything, but I figured that was out of kindness. I was repeatedly changing pants, changing underwear, all without saying anything about it to anyone. But none of it really did any good.

Isn't that freaky? It makes you think you can't trust your senses.

As I said, more recently the odors have been back, but not nearly to the degree of before. But I am definitely catching whiffs of things that smell like they ought to be hosed down, defumigated, set out in the trash, and reported to the health department. Everything is suspect. I'd love to know more about the alchemy of odors, of combinations, and how perceptions of odors work. And what anyone else thinks about this problem.

When I'm out and about and catching these odd whiffs, something always occurs to me, that they're hard to describe. I can never pinpoint what it smells like. Because they don't really smell like anything you can compare them to. The potential seems to be there, though, for anything wafting through the room to mix with something else and to be transformed into a third, more angular stench. Maybe it's a plate of food from the next table mixing with your plate of food's smell. By the time it gets to your nostril, odor-wise it's brown with big claws.

Now, just imagine what it's like to walk by: An aquarium, a coat rack, a pizza restaurant, a shower, a bathroom period, or what your hand might smell like after shaking hands with someone.

We always like to think, and I usually assume, that my reality is the same as everyone else's. Of course there are great differences in how we think about the same body of facts. Truth to me seems obvious, but my Republican enemies have a totally different take. This is simply a difference in opinion in the nose, or more accurately, a different of opinion between the nose and the brain. My guess, something in the brain gets an odd stimulus from somewhere and so what is normal becomes wacky.

Yet some things are completely normal, so it's a mystery.
Posted by dbkundalini at 5:55 PM