Cadaver Dogs Need To Get Our Attention 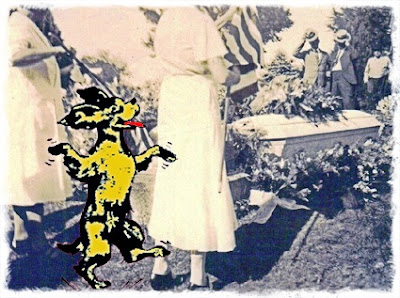 "It's over there! The cadaver!" he might say. "You're looking for a dead body, I've scented one!" would be another direct alternative. Or even, "I smell something in yonder box, you might want to check it out," would probably be enough, although he's not explicitly mentioning cadavers or dead bodies.

All those would be useful explanations, but, alas, dogs can't talk. They can only motion (the Pointer), make noise (the Whistling Dachshund), or bite your leg off (the Pit-bull). If they're some other dog, they have to make do with the assumption that you who are searching for the body will recognize it when they've found one.

But this doesn't always happen if the body isn't really lost. In those cases, they have a few different choices: 1) Dance around and tug at you; 2) Claw at the casket, or the deceased if he's not yet in a box; or, 3) Ignore its discovery. But I can't see a cadaver dog having the decision-making capabilities to simply ignore the body. Because of their training, anytime you get them around a dead body, they're going to let you know!

Our best recommendation for cadaver dog owners would be to leave your dog home if you're going to a funeral and don't want to be bothered with all the antics. Because it can be embarrassing to disrupt someone's funeral by having to lecture your dog in public. Especially right there at the grave site, with the pastor having to start over several times with his final remarks. "If anyone has just cause why the deceased should not be buried, let him speak now or forever hold his piece." Then an embarrassing "Howl!"

The whole story is this: A cadaver dog, as macabre as it may sound, can be very useful if you're trying to find a missing body. But they're not helpful at all if the body's location is well known and not a mystery at all.
Posted by dbkundalini at 10:25 AM