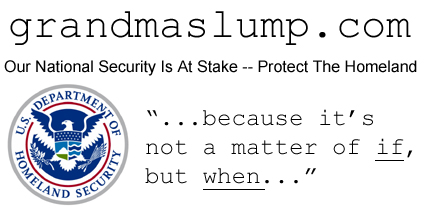 I can't keep anything under wraps for long. The guys at Wikileaks, always revealing my secret plans for the blog, leaked it a few days ago. And now I can announce it officially as true. I have a brand new address: grandmaslump.com.

Yes, I've joined the big boys, with my very own "dot com," hopefully not just in time for the bubble to burst!

I've had my grandmaslump.blogspot.com address for quite a while, so it was a complete shock to me that grandmaslump.com was even still available. But it was!

The honest-to-God truth is maybe it wasn't available, if you know what I mean. But the government has the means to twist a few arms when they want to. So let's say some other guy had grandmaslump.com. They put pressure on him to give it up, which is only right, because it was meant for me.

You're probably wondering why I made the switch after all these years. So here's the real deal. As part of the government's push to make the homeland safe, they've been designating certain internet sites as vital to the national interest. And because I gave a couple hundred bucks in the last election cycle, and with 2012 looming, and them hoping my generosity will continue, I qualified. I am officially "vital to our national interest"!

Seriously, the Department of Homeland Security contacted me one day, offered to pay for the domain name, and after making them pass the sniff test, I accepted. Simple. And they were more than generous. It's not just for one year like I was expecting. It's for life! Isn't that something! I've got the grandmaslump.com domain forever! [I'm fist-pumping the air.]

The ironic part about it is this, that I actually think the Department of Homeland Security is by and large a lot of crap. We had 9/11, the powers that be "didn't see that one coming," so now we need an entire department just to sit around and buy people websites. LOL, it's ridiculous! Hell, one of my neighbors got his driveway graveled for nothing, just because the police occasionally turn around in it to chase a speeder. This guy's driveway is "vital to our national security"! Anything to spend money .... and keep us safe! :)

The way the Department came about, though, if memory serves, is that the Democrats proposed it, of which I am one. The Republicans were against it, then they embraced it and it took on a more Republican slant and was even promoted by them, and dare I say, exploited by them. Remember all the duct tape we bought? Someday archaeologists will be digging through a mound, come to a stash of duct tape, and immediately pin it as "post 9/11."

We had -- oh, what was that clown's name? -- that big doofus from Pennsylvania ... -- I'm drawing a blank -- oh, yeah! Tom Ridge! He was George W. Shithead's man, and he kept us busy, didn't he! The alert is red, orange, blue, chartreuse, the chart is throbbing, the thermometer's exploding at the top! Then, fortunately, the 2004 election was over, Shithead was again ensconced in the White House, and we were safe!

But by now they had all this money. So they threw it at crazy stuff. I literally saw wheelbarrows of cash being pushed down the street, with the wheelbarrows having the Department's logo on the side. They turned in to this big heavy-duty truck shop and came out with a Command Post for the local police, something like $250,000. An armor-plated Winnebago. Meaning the July 4 parade would be safe, since that's what they did with it. Parked it at the main junction, monitored the crowd, and sold cotton candy out the window.

Now, with the next election season upon us, they're cozying up to guys like me, and I can't complain. I'm happy to have my own web domain. Ten bucks a year ain't chickenfeed! And since it's for life, and let's say I live another 25 years, that's roughly ... hundreds of bucks ... Unless, and this is my biggest fear, we get another idiotic Republican president and he cuts the funding, with Obamadomains going down the tubes.

But I'm going to live for today, not for what is to come. And today I have "grandmaslump.com," giving my blog some real credibility. You realize, I hope, that yahoo.com and google.com are dotcoms just like me. Once upon a time, any schmuck could've registered google.com. Think about it. It was just sitting out there! I could've registered google.com once upon a time, then what became Google might have been grandmaslump.com. People would be looking up stuff on the internet, saying, "I grandmaslumped it!"

Today, thanks to the Department of Homeland Security -- and their tireless work protecting the Fatherland and upholding the Motherland -- you can "grandmaslump" it. Just by checking out my blog, not at the old address, although that will still work, but at the newer, better, bigger web address!
Posted by dbkundalini at 2:11 PM