So Tall A Tree, So Small A Man 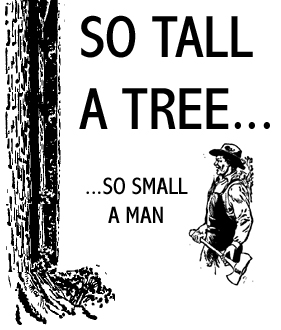 I'm seeing this farmer dude looking at this tree like he's thinking of cutting it down. And I'm like, "No, that's not happening!"

And that's it. End of story. I won't give in. I won't let it happen. "Thus far and no farther," I say, "I will protect this tree, because trees are our future, and you're not cutting down our future!"

I'm sorry, that's the way I am. I simply lashed out because I saw it happening. I was the guy there on the scene. If it wasn't for me (no one else was there, just me and him), he would've cut it down. But I gave him something to think about.

Really, I can be very vociferous if I believe in something strong enough. Vociferous? Is that the right word? I think so, vocal in a furious way. And I really was. I laid it all on the line.

He looked at me and started spouting some bullshit about it being his land, his property, even his tree, and he would cut it down if he damn well pleased. "Anyway," he wondered, "What are you doing on my land? This timber is posted!" By now he was in a full blown rant, ranting at me, that he would call the sheriff, etc.

I was like, "I don't give a rat's ass who you call, but you are not cutting down this tree! I don't care if I have to take on the whole f------- U.S. Army, that tree is not coming down!" And that's when he started backing up, even though he had an axe in his hand. One, he wasn't going to use an axe on me. That'd be prison for him. And two, he didn't know what I was capable of. As far as he knew, I might charge him and use the axe on him. Believe me, I was tempted...

He looked at me and relaxed the axe, thinking that might defuse the situation. So why was I on his land? That's weird, I don't really know. I thought I was just going for a walk, but maybe it was where I was supposed to be. I wanted to take a picture of some trees, then I see this guy getting ready to cut down the tree. He had a cloth to wash his hands with afterwards and everything! So I jumped in!

Then everything kind of calmed down. He looked at me, I looked at him, and both of us knew something had to give. But I wasn't going to budge. He came over, offering me the hand of friendship. Then we got down to brass tacks, what my motive was in saving the tree.

I explained, "You might think you're a big man. But, no offense, you're a shrimp just like me. This tree is a lot taller." I went on, reminding him of a famous song from the '40s, recorded by Bing Crosby, "So Tall A Tree," which has the great lyric, "So tall a tree, so small a man," reminding us that the tree is big and we're so little.There's some comparisons with man and trees in the song, and man comes out, so to speak, on the short end of the stick.

With that, he gave up the fight. And we both walked away ... with the tree still standing!

This all happened yesterday. Then today I was thinking of it again, and going over the lyrics of the Bing Crosby song. Part of the lyrics say:


A man may grow for all he's worth,
But only tree's are down to earth.
So tall a tree, so small a man.

With that in mind, I wrote some fresh new lyrics to go with the song. See if you like what I've written, and see if you agree. I hope you do. Here they are:

A man might reach the clouds on high,
A tree will wave as it goes by.
So tall a tree, so small a man.

A man will always want for height,
A tree will tower out of sight.
So tall a tree, so small a man.

A man could be a giant bloke,
But to a tree he's just a joke.
So tall a tree, so small a man.

A man might grow up big and tough,
But to a tree it's not enough.
So tall a tree, so small a man.

A man might be all you'd want,
But to a tree he's always a runt.
So tall a tree, so small a man.

Posted by dbkundalini at 7:28 PM