The King Of Group Dynamics 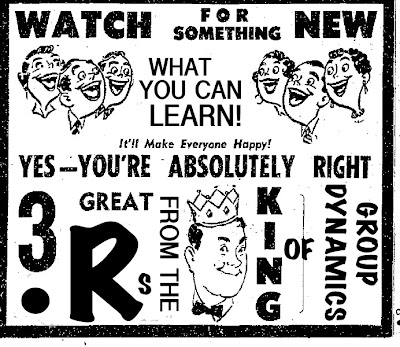 I'm taking personal inventory, thinking of my many good qualities. I'm not what you'd call famous, by any stretch. I tend to be able to walk the streets or go to restaurants without people coming up to me for favors. That's good.

But still, the more people who know and respect you, the better. Even though I'm not famous, I am basically known for two things: 1) Writing this blog; and, 2) Being the King of Group Dynamics. Now, lest you think I'm kidding around, I'm not. The fact is, you're at my blog, and I'm the guy who writes it. And the additional fact is, as far as I know, no one else has claimed the mantle of King of Group Dynamics, so I'm it.

Really, if anyone has a more legitimate claim to the title of King of Group Dynamics, I'd love to meet him. But I'm confident there isn't anyone.

Someone might say, what legitimacy do I have to the title? It's a fair enough question, and of course I wouldn't have asked it if I didn't have a good answer. If you look through my posts, I've been writing about Group Dynamics on and off for the last few years. And not only that, but I've been cited in a couple of textbooks (albeit undergraduate) for my "3 Rs of Group Dynamics."

I can't remember precisely how I came up with the 3 Rs. They just came to me, I guess. I knew them, I'm going to say instinctively just based on my dealings with people. So in that sense I was using the 3Rs before I even knew they technically could exist as an expressed concept. But one day -- several years ago -- I needed to do something, some kind of meeting with youth, and I thought, I need to really know what I'm doing or these little bastards will eat me alive!

So I sketched them out, what would become the famous (in certain textbooks) "3 Rs of Group Dynamics." Just as an aside, I really like the expression, because it makes it so definite and authoritative. It doesn't say, "Among the many other Rs of Group Dynamics, I've extracted just three" or "I have my 3 Rs and some other guy has his 3 Rs, and one set of 3 Rs is just as good as any other." It says, "These are the 3Rs of Group Dynamics, and if anyone thinks otherwise, he's an idiot." I almost said asshole but I went with idiot just to be nice.

In case you forgot what the 3 Rs are, you could look it up in my archives, or you could check at your local university bookstore for one of the textbooks, or I could just tell you again. They are: 1) aRrange, 2) Reconnoiter, 3) Ruminate. I've always been a little sensitive about number one, since it obviously doesn't begin with an R. But it's just like aRithmetic in the original 3 Rs. The big difference is that sometimes you see it written 'Rithmetic, but it'd be tough to call my R 'Range. With 'Rithmetic, it's unambiguous that it refers to arithmetic, but 'Range might mean something like "ranging around the room," and that'd be only half accurate.

Getting back to the example of the youth event. I needed to aRrange the room, the environment, so the little bastards wouldn't run roughshod over me. The only Group Dynamics we would've had would've been disastrous. Reconnoitering means paying close attention to what is happening, because you're structuring and guiding the Group Dynamics at play in the moment. You want your purposes to be fulfilled. And you Ruminate both during the moment, which is always in an interplay with Reconnoitering, and later, bringing forth our understandings after the fact. It's amazing, I know, how Ruminating now guides aRranging later! I love the symmetry there!

Confidential to textbook publishers: I know by law you don't have to pay me when you quote the 3 Rs. But don't you think you have at least a moral obligation to throw me a few bucks? Especially with what you charge for the books?
Posted by dbkundalini at 3:04 PM