America: Golden Age To The Rescue 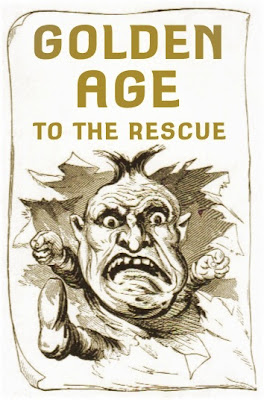 One of my favorite patriotic songs is the old chestnut, virtually a standard by now, "America The Beautiful." I love it so much I'm actually standing as I write this.

It's the one that tells of "spacious skies," "amber waves of grain," "purple mountain majesties," and "the fruited plain." It gives me a real urge to go outside more, and I would if it weren't for mosquitoes.

You might remember all the verses, including this great one:

America! America!
God shed His grace on thee,
And crown thy good with brotherhood
From sea to shining sea.

Over the years, I've been repulsed as I've heard critics tear into that verse. "Oh!" said they, wringing their hands as they hyperventilated in an overly literal and earnest stew, "That can't be right! That's blind idealism! Because we all know that our cities are not undimmed by human tears!" They would make the case that the cities were a cesspool of suffering, with nothing to recommend them. Then they'd spell it out: Crime, murder, strangulation, pickpockets, muggings, and sweatshops. With lots of human tears.

So, assuming there was some truth to that, the song told of something that was false. And so it went. Until now ... when, with the coming of THE GOLDEN AGE we can at long last now gladly announce, The song is true! There are no more human tears! It is the Golden Age!

Something happened, something apparently happened at a very deep level, to suddenly change the heart of man from evil to good. It's been prophesied, that's for sure, so there must have always been the potentiality for perfection in us. I believe there was! But the fact that it happened just like that, and mankind as a whole turned on a dime, in an instant, is the amazing part. And yet we know it's true.

Criminals gave up crime. Murderers gave up murder. The rich were happy to share with the poor. The poor took the rich under their wing and taught them at long last how life works. In this vast switch, of course the Republican party had to go under. So one day the earth cracked open and sucked only them down, bringing stability and happiness even to the political process. All countries willingly gave up their weapons. Even now, they're still working out the logistics for distributing all the plowshares. It's a great problem to have. Everyone's smiling!

I've been very happy with the switch. No more do I have to see "Ghost Hunter" shows on TV. With the removal of evil from the world, all bullshit became extinct. And besides that blessing, it's great to know that everyone in the world has all he or she needs for the best life possible. There's always someone to share, as the bounty overflows.

Tears are no more, pain, suffering, it's all in the past! Creative minds are busy editing old movies and books to take out all conflict, since we're already starting to forget what it was like. Everyone in the movies and books will be happy the whole time. No one will be portrayed doing anything to another character that is negative even in the slightest. Finally, I can go back to the movies, since I hate anything but perfect happiness. I still remember conflict. It always gave me a headache.

Rejoice, America, that your song is finally true. "Thine alabaster cities gleam." There's no more shadow, it's all bleached white, great and beautiful!
Posted by dbkundalini at 9:34 PM