Why You'll Never See Me In Black 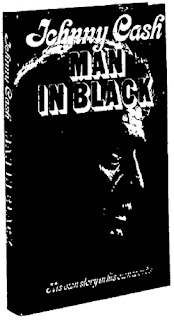 Probably all of you remember Johnny Cash being "The Man In Black." He wore black, he talked about his clothes, he wrote a book called that, and he had a hit song of the same name.

Now that he's gone, you don't hear much about it anymore. Which is why I want to reopen the subject for a new generation. Because now, thanks to the world's progress, there's no more reason to wear black. And if Johnny Cash were here today and able to look around at our progress, I'm sure he would agree, and purchase some lighter threads.

Remember his song, "Man In Black," in which he explained why he wore black? He sang:


I wear the black for the poor and the beaten down,
Livin' in the hopeless, hungry side of town,
I wear it for the prisoner who has long paid for his crime,
But is there because he's a victim of the times.

Right off the bat we see where he's going. Back then there were folks who were called poor and beaten down, folks who were hopeless and hungry. So to address that, Johnny Cash wore black. Of course there was nothing about his clothing that told the story itself. He needed to spell it out for us, then whenever we'd see him in black, we'd know what was going on.

But hallelujah! There's no more need for black, now that everyone has enough for his daily needs, now that folks are no longer beaten down, and now that no one is hopeless or hungry. And the prisons are empty. Most of them have been torn down, there being no more need for them. If I felt like wearing black today, I'd have to come up with a whole new set of reasons, because with progress we've eliminated the old ones. That's great news!


I wear the black for those who never read,
Or listened to the words that Jesus said,
About the road to happiness through love and charity,
Why, you'd think He's talking straight to you and me.

Again, hallelujah! There's no one, except maybe newborn babies, who hasn't read or listened to the words of the Lord. All of us in this more enlightened time, thanks to the strides of progress of the last 30 years, have easy access and eager minds to imbibe the wisdom of Christ, as he speaks still about the road to happiness through love and charity. We've not only had the teachings, we've lived out their spirit. So ... no more need for black.


I wear it for the sick and lonely old,
For the reckless ones whose bad trip left them cold,
I wear the black in mournin' for the lives that could have been,
Each week we lose a hundred fine young men.

There's no more sick, there's no more old who are lonely. There's no more reckless ones taking bad trips. There's no more need to mourn the lives that could have been, because they're all living to a ripe old age, thank you very much, and enjoying their lives immensely. I'm thinking the last piece of the stanza had to do with guys who were fighting and dying in Vietnam. Of course that's long since over with, and because the world has found a way to live in peace, everything now is great. Black is definitely out!

Johnny Cash was, I hate to say it, the definition of pessimism. Read this depressing verse:


Well, there's things that never will be right I know,
And things need changin' everywhere you go,
But 'til we start to make a move to make a few things right,
You'll never see me wear a suit of white.

First, he thinks "there's things that never will be right," saying he knows that! Unfortunately he isn't with us today to eat his words! He didn't imagine the golden age that has opened up to us, where every evil has been dealt with and everything good, right, and proper is the order of the day. And yet, look at the last piece, he at least had the optimism to imagine that we might "start to make a move to make a few things right..." What?! "Start to make a move..." and "to make a few things right." It's not as optimistic as it sounded on first hearing, but only then -- only then -- would we, might we hope to see him wear a suit of white!

The big finale drives home his pessimism and his despair at having to always wear black:


Ah, I'd love to wear a rainbow every day,
And tell the world that everything's OK,
But I'll try to carry off a little darkness on my back,
'Till things are brighter, I'm the Man In Black.

He'd "love" to wear a rainbow everyday, he'd "love" to tell the world everything's OK, but, alas, he couldn't. If only he'd lived, he would have seen that day come, that day of rainbows, happiness, fulfillment, and righteousness. Instead, as he shuffled off the stage, he sounded a Suffering Servant/Christ-with-His-cross tone, "I'll try to carry off a little darkness on my back..."

You know what, that's a far out thought! Maybe after Johnny Cash's death, his atonement amounted to something in glory. Maybe that's how we got the switch, how everything started coming up roses. Johnny Cash's clothes saved the day. In glory, his having been clad in black ... saved the world! Stranger things have happened!

So, up there somewhere, today, Johnny Cash has to know the world's Golden Age is here. Injustice, heartache, and all forms of evil have been dealt with. Mankind is in harmony with his brother once and for all! And that's why you'll never see me in black!
Posted by dbkundalini at 7:13 PM