Comfort To The Stranger 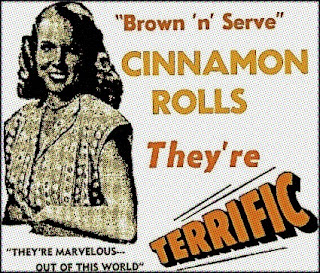 Here I go, across the great lawn, with a tray of sweetmeats for the stranger.

"How are you?" I say, tempering my smile while keeping it genuine. "How about a cinnamon roll?" It's important to keep body and soul together, it's good for the marrow.

He looks at my arm for the Red Cross emblem, but seeing none, realizes I'm just a kind person given to instant solidarity, at least admiration from afar.

The leaders are gathered like Civil War generals around their battle plans, a couple scratching their chest-length beards pensively. One uses the nasty phrase "goddammit" a lot. I'm thinking, "Cinnamon rolls for the leaders," but I hate to interrupt their plans -- and the goddammit guy might have other plans for my head, involving a pike! 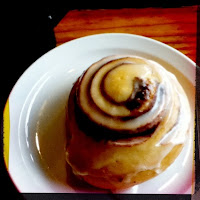 An underling sees me -- possibly I'm a spy, or an autograph hound, but my confidence says otherwise. He sees the cinnamon rolls and realizes I'm an angel of mercy, while perhaps also being an attention-seeker. He moves closer to prevent any disturbance of the generals at their work. "Goddammit!" I hear the one bluster, so I leave the rolls in the hands of the lieutenant.

I cut across the concourse. A few bandaged hands are raised. So many worthy brothers and sisters, but I'm just a man, with only two hands and no super powers. I cast down a look of mercy, seeing dry, hungry mouths everywhere. The poor souls. They have but moments to live, in some cases, and a morsel of a warm cinnamon roll would do them such good.

Partial dream interlude: At the periphery, I come across an old friend, a former classmate. She's virtually naked, maybe entirely -- I don't look -- except at the six-inch scar she's showing me on the right side of her abdomen. She's been through a lot. I must not stay. I'm out of cinnamon rolls.

I look down and I'm barely dressed either. I need to cross a gravel alley to make a call back to the kitchen van. Even in my near nudity (waist down), I'm thinking I need to go for it; these people are hungry.

Off to the left a building gives way, imploding but more or less silently, leaving an open space in which I see the family owners of the place discussing how their place will be remembered. (There's no talk of cinnamon rolls.)

In here somewhere, there's a railroad station. The track seems to narrow and is blocked. I'm with the stationmaster. He's waiting for a train that might take some time arriving. I'm asking his business. Then the train shows up from the east. It brings the generals, the very ones, to their duties.

A stern "Goddammit" pierces the air and brings me to my senses. I run for more cinnamon rolls. I think, this is a small job -- but to give comfort to those at the front lines is very much a big deal.
Posted by dbkundalini at 10:16 AM